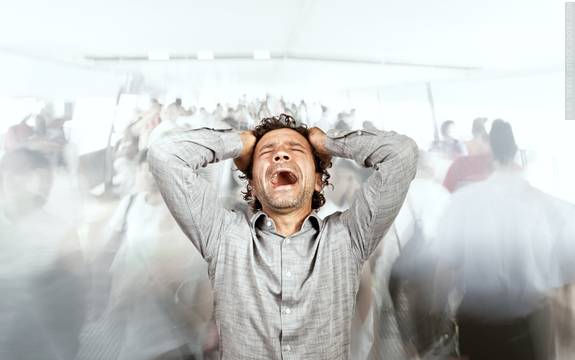 Agoraphobia is a form of anxiety disorder. The name is literally translated as "a fear of the marketplace", from the Greek agora, and thus of open or public spaces. Many people suffering from agoraphobia, however, are not afraid of the open spaces themselves, but of situations often associated with these spaces, such as social gatherings. Others are comfortable seeing visitors, but only in a defined space they feel in control of--such a person may live for years without leaving his home, while happily seeing visitors and working, as long as they can stay within their safety zone.

An agoraphobic experiences severe panic attacks during situations where they feel trapped, insecure, out of control, or too far from their personal comfort zone. During severe bouts of anxiety, the agoraphobic is confined not only to their home, but to one or two rooms and they may even become bedbound until their over-stimulated nervous system can quieten down, and their adrenaline levels return to a more normal level.

Agoraphobics are often extremely sensitised to their own bodily sensations, sub-consciously over-reacting to perfectly normal events. To take one example, the exertion involved in climbing a flight of stairs may be the cause for a fullblown panic attack, because it increases the heartbeat and breathing rate, which the agoraphobic interprets as the start of a panic attack instead of a normal fluctuation.

Agoraphobia can be successfully treated in many cases through a very gradual process of graduated exposure therapy combined with cognitive therapy and sometimes anti-anxiety or antidepressant medications.

Extreme Phobias: Collyer Brothers
Extreme phobias: an extreme case of fear meeting fate.
10 Causes of Stress (and How to Avoid Them)
What events cause the most stress and how can we avoid them?
A Guide To Overcoming Phobias: Overcoming Your Fear
Learn to overcome your fears and phobias.