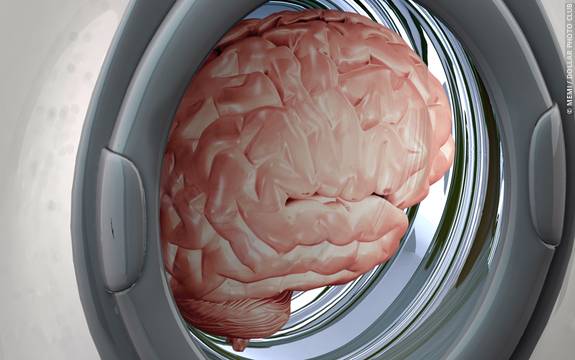 According to Jeffrey K. Hadden, the concept of brainwashing first came into public use during the Korean War in the 1950s as an explanation for why a few American GIs appeared to defect to the Communists. Brainwashing consisted of the notion that the Chinese communists had discovered a mysterious and effective method of causing deep and permanent behavioral changes in prisoners of war.

The idea was central to the 1962 movie The Manchurian Candidate in which a soldier was turned into an assassin through brainwashing. It is also central to The Ipcress File, where Michael Cain tries to resist being re-programmed.

Two studies of the Korean War defections by Robert Lifton and Edgar Schein concluded that "brainwashing" was an inappropriate concept to account for this renunciation of U.S. citizenship. They found that the Chinese did not engage in any systematic re-education. The Chinese were, however, able to get some of them to make anti-American statements by placing the prisoners under harsh conditions of deprivation and then by offering them more comfortable situations such as better sleeping quarters, better food, warmer clothes or blankets. Nevertheless, the psychiatrists noted that even these were quite ineffective at changing basic attitudes for most people. In essence, the prisoners did not actually convert to Communism. Rather many of them behaved as though they did in order to avoid the plausible threat of extreme physical coercion. Moreover the few prisoners that were influenced by Communist indoctrination did so as a result of motives and personality characteristics that existed before imprisonment.

Another frequent use of the term brainwashing was concerning religious Cults. It was alleged that they would recruit new members by isolating them from their family and friends (inviting them to an end of term camp after university for example), arranging a sleep deprivation program (3am prayer meetings) and exposing them to loud and repetitive chanting. Religious brainwashing tended to involve love bombing rather than torture. Most anti-cult activists now accept that the brainwashing theory has been discredited. Some anti-cult activists started using the term mind control instead.

Currently the concept of brainwashing is not used by most psychologists and social scientists, and the methods of persuasion and coercion used during the Korean War are not considered to be esoteric.

The word brainwashed is still informally used to describe someone who holds strong ideas that are implausible and are completely resistant to evidence, common sense, experience and logic. Especially when these ideas developed under external influence e.g. books, TV programs, other people or a religious organization.

Social Influence
Why do people to conform in groups? A look at how social influence affects opinions and behavior.
Minority Influence
Minority influence enables individuals to change the opinions of others. We look at how it changes opinions and the factors that affect minority influence.
Video Game Exposure Reinforces 'Stereotypes' - Study
Researchers find link between video game use and gender stereotypes in new study.