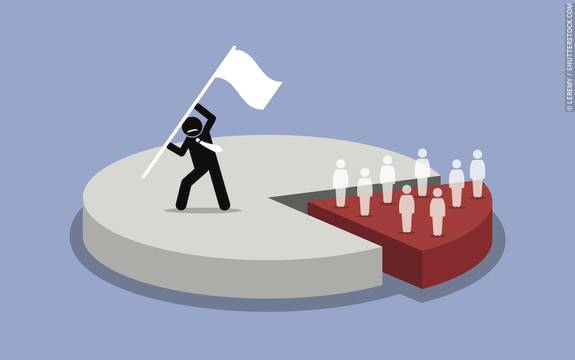 Minority influence explains how a person is able to persuade members of a group to change their opinion.

Minority influence is a type of social influence which results in a change of views amongst the majority of members within a group. It involves an individual or minority of a population persuading other members to accept their argument, even if this contradicts the more popular view held by the majority.

This form of influence has been used effectively by civil rights movements throughout the 20th Century to shape public opinion.

During the 1910s, the suffragette movement challenged the status quo, which restricted the right to vote to male citizens. A minority group, led by Emmeline Pankhurst in the UK, eventually persuaded the majority that this was unfair, and enfranchisement was extended to women in 1918, overturning accepted views regarding women’s rights.

Whilst minority influence involves a challenge to popular opinion and group norms, it can serve the interests of the wider population in the long term. Groups in which members are obedient to accepted norms tend to engage in groupthink, whereby long-held views are upheld without question. Critical thinking is discouraged, with dissenters being ostracised by the majority.

For example, employees at a factory which uses dated practises to produce its wares may be reluctant to change their habits. They may even be suspicious of a new manager who suggests that they update their manufacturing methods. In this instance, groupthink can lead to the factory becoming uncompetitive, whilst its competitors adopt more efficient practices.

The minority influence of the manager challenges those majority-held views, and results in the questioning of dated practices. This might, over time, lead the employees to reconsider their reluctance to change, leading to the majority overcoming a groupthink mentality and gradually changing its opinion.

Social influence can take numerous forms. Majority influence, for instance, is a normative influence, leading to individuals complying with the norms of the majority. But whilst peer pressure leads to public compliance (e.g. embracing the attitudes of the crowd), it does not always result in conversion - a change in a person’s unexpressed, private views. A person subjected to majority influence will try to gain the acceptance of a group by complying with its norms, but may retain their private views contravening those of the majority.

Minority influence affects group members differently. When a minority expresses a view that contradicts the majority, other group members will be unlikely to gain the acceptance of the wider group if they adopt this minority opinion. Therefore, the minority is unable to exert a normative influence on other members.

Instead, minority views tend to be adopted when they exert informative influence: the unusual nature or novelty of the minority’s argument means that other members of a group pay close attention to it. They consider the argument based on its merits, rather than to comply with group norms. Members begin to question the validity of their existing views, and whether the minority view is in fact a more informed opinion than that held by the majority.

Over time, as members evaluate a minority view, they may internalize it - adopting it as their own opinion through a process known as conversion. This change in private opinion prompts a shift in behavior, and a member may promote his or her newly-acquired view to other members of the group. What began as a minority view becomes a majority view as more people adopt it.

Unlike compliance, where a person changes his or her outward behavior but not their private opinions, minority influence can have a lasting effect on an individual’s views and behavior even when they leave the group.

Early research into the ability of minority influence to affect a group’s attitudes and behavior was conducted by social psychologist, Serge Moscovici.

In a 1969 study, participants were presented with a number of slides, and were asked to identify the color shown in each slide in the company of other participants. In the group, confederates were instructed to misidentify the slides as being green, contrary to participants’ own observations.

Moscovici found that the minority view expressed by the confederates influenced the participants’ opinions, particularly when the minority was consistent in its opinion (Moscovici et al, 1969).

Real-life examples where minority influence affects the majority within a group include:

Variables which affect the efficacy of minority influence include:

For instance, a politician who alters his or her stance on an issue may be less effective in convincing the electorate than a candidate who expresses just one view consistently.

The confidence of a minority can also affect its ability to influence other members.

Nemeth and Wachtler (1974) conducted an experiment in which a group of participants (including a confederate) were asked to decide the amount of compensation that ought to be awarded to a person who had been injured.

Participants were instructed to sit around a table to discuss the compensation amount, either in seats which were grouped, or in a solitary seat at the head of the table.

The researchers found that when the confederate seated themselves, without guidance, at the head seat, other participants were more likely to agree with their suggestion of an amount of compensation than if they followed the experimenter's directions.

The findings suggest that the perceived confidence of a minority to make decisions independently of the group can lead to other individuals giving more consideration to its views.

The motives of a minority, as perceived by other individuals, can also affect the influence it is able to exert on the majority.

Maass et al (1982) found that, when a minority is seen as acting in its own self-interests or an individual’s attempts at persuasion are perceived as being motivated by personal gain, other members are more likely to dismiss their opinions. However, if a minority is thought to be acting selflessly and in the interests of the majority of the group, other members are more likely to consider and be influenced by the opinions it expresses.

Clark and Maass (1990) found that the size of the majority within a group can affect the ability of a minority to influence members. In an experiment in which participants were asked to debate issues such as abortion, they found a negative correlation between the number of members holding a majority view and the sway held by minority views. As a majority view gained the support of more members, individuals holding an opposite viewpoint were less able to influence the group.

This may explain the snowball effect of minority influence, whereby individuals are attracted to a viewpoint on the basis that they believe it is becoming more acceptable, and is gaining popularity amongst other members.

A final observation regarding minority influence is that, after being successfully persuaded by a minority, people tend to forget the origins of their new views. This phenomenon, known as social cryptomnesia, often occurs when a person held negative views of the minority whose views they adopted. Instead of identifying with the minority group, individuals will dissociate the minority views from the people who promoted them.

An example of this would be when a ‘green’ group promotes responsible behavior, such as recycling, as a way of protecting wildlife. An individual who associates the group with ‘hippies’ and protests may find it difficult to identify with the group at the time, but over many years, the group’s views become mainstream and the person becomes more environmentally conscientious. Whilst minority influence has led to their internalisation of environmentalist ideas, they reject the notion that the group was responsible for their new recycling routine and maintain a negative view of the minority group.

Social Influence
Why do people to conform in groups? A look at how social influence affects opinions and behavior.
Sources of Stress: Life Events
How the life changes caused by experiencing major events can affect stress levels.
Bandura's Bobo Doll Experiment
Albert Bandura's influential Bobo doll experiments reveal how children imitate TV violence and the behavior of others.