The Asch conformity experiments were a series of studies that starkly demonstrated the power of conformity in groups. 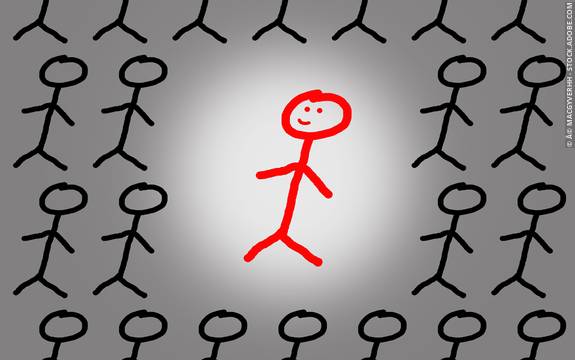 The Asch conformity experiments were a series of studies that starkly demonstrated the power of conformity in groups.

Experimenters led by Solomon Asch asked students to participate in a "vision test." In reality, all but one of the partipants were shills of the experimenter, and the study was really about how the remaining student would react to the confederates' behavior.

The participants -- the real subjects and the confederates -- were all seated in a classroom where they were told to announce their judgment of the length of several lines drawn on a series of displays. They were asked which line was longer than the other, which were the same length, etc. The confederates had been prearranged to all give an incorrect answer to the tests.

Many subjects showed extreme discomfort, but most conformed to the majority view of the others in the room, even when the majority said that two lines different in length by several inches were the same length. Control subjects with no exposure to a majority view had no trouble giving the correct answer.

One difference between the Asch conformity experiments and the (also famous in social psychology) Milgram experiment noted by Milgram is that subjects in these studies attributed themselves and their own poor eyesight and judgment while those in the Milgram experiment blamed the experimenter in explaining their behavior. Conformity may be much less salient than authority pressure.

The Asch experiments may provide some vivid empirical evidence relevant to some of the ideas raised in George Orwell's Nineteen Eighty-Four.

Social Influence
Why do people to conform in groups? A look at how social influence affects opinions and behavior.
Zimbardo's Stanford Prison Experiment
Zimbardo's Stanford prison experiment revealed how social roles can influence our behavior. We look at how it was conducted and what we can learn from it.
Social Influence: Role Playing
What causes us to obey to authority figures such as police, teachers and politicians and why do people conform to social norms?