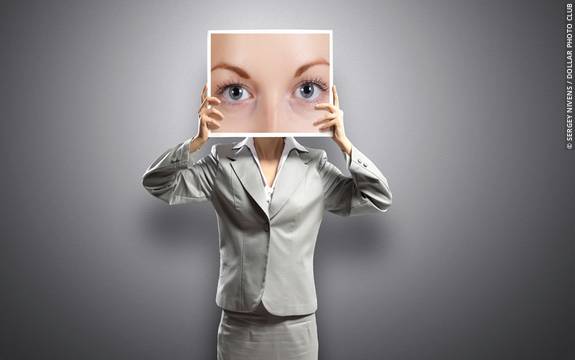 They've existed for 540 million years and most of us have a pair, but aside from giving us sight, what can we tell from looking at someone's eyes?

People say that the eyes are a "window to the soul" - that they can tell us much about a person just by gazing into them. Given that we cannot, for example, control the size of our pupils, body language experts can deduce much of a person's state by factors relating to the eyes.

The pupils are a part of our body language that we practically have no control over.

As well as adjusting the amount of light taken in the process of sight (Dilation: pupil size increasing; Contracting: pupil size decreasing), Eckhard Hess (1975) found that the pupil dilates when we are interested in the person we're talking to or the object we're looking at.

As an indicator, check a friend's pupil size when you're talking to them about something interesting, then change the subject to something less interesting and watch their pupils contract!

For making contact and communicating with a person, effective eye contact is essential to our every day interaction with people, and also to those who want to be effective communicators in the public arena:

Generally in Western societies and many other cultures, eye contact with a person is expected to be regular but not overly persistent. Constant eye contact is often considered to be an attempt at intimidation, causing the person who's the object of a person's gaze to feel overly studied and uncomfortable.

Even between humans and non-humans, persistent eye contact is sometimes unadvisable: the New Zealand Medical Journal reported that one reason so many young children fall victim to attacks by pet dogs is their over-poweringly regular eye contact with pets, which causes them to feel threatened and defensive.

Overly persistent eye contact is also a sign of a person's over-awareness of the messages they are emmiting. In the case of a person who is try to deceive someone, they may distort their eye contact so that they're not avoiding it - a widely recognised indicator of lying.

Why do we avoid looking at a person? It may be because we feel ashamed to be looking at them if we're being dishonest of trying to deceive them. However, Scotland's University of Stirling found that, in a question-and-answer study among children, those who maintained eye contact were less likely to come up with the correct answer to a question than those who looked away to consider their response.

Eye contact, as a socialising device, can take a surprising amount of effort to maintain when this energy could be spend on calculating, as opposed to perceptive, tasks.

Humans are believed to be the only species on Earth to cry, though there is emerging evidence of it in elephants and gorillas.1

In most cultures around the world, crying is considered to be caused by an extreme experience of emotion; usually, it's associated with sadness or grief, though often extreme experiences of happiness, and through humor, can cause us to cry. Often, forced crying in order to gain sympathy or deceive others is known as "crocodile tears" - an expression from myths of crocodiles 'crying' when catching prey.

Aside from our instinctive need to blink, our emotions and feelings towards the person we're talking to can cause us to subconciously alter our blink rate.

Blinking more than the average 6-10 times per minute (see right) can be a good indicator that a person is attracted to the person they're talking to, and is for this reason used as a sign of flirting.

Men and women blink at roughly the same rate as each other - between 6 and 10 times per minute in a normal setting. Additionally, animals such as tortoises are known to blink at different times with each eye.

In the West, we consider winking to be a cheeky form of flirting - something we do with people that we know or are on good terms with. However, there are cross-cultural variations on the issue of winking: some Asian cultures frown up on the use of this form of facial expression.2

The thing to look out for is the direction someone's eyes are looking in when they're thinking. Looking to their left indicates that they're reminiscing or trying to remember something. On the other hand, looking to their right indicates more creative thoughts, and this is often interpreted as a potential sign that someone may be being deceitful in some situations, i.e. creating a version of events.

Note: if a person is left handed, the direction indicators may be reversed.

From the findings above, what's the best way to convey a "positive you" using eye contact? If you want to show you're interested in what someone has to say, make eye contact often, but remember that unblinking stares are disconcerting.

Researchers have found that when people are engaged in an interesting conversation, their eyes remain focused on their partner's face about 80% of the time - but not exclusively on the eyes. Instead, they focus on the eyes for two to three minutes, then move down to the nose or lips, then back up to the eyes. Occasionally, they look down to the table momentarily, then back up to the eyes.

Avoid looking up and to the right - it's a universal symbol of boredom and dismissal.

Learn to Read and Interpret Body Language with our Online Course
Share:
ShareTweetStumble UponPin It
Most Read

What the handshakes of leaders can teach us, and perfecting your handshake.