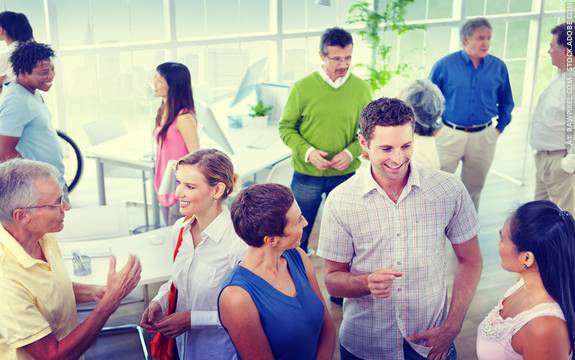 You can stop talking but you can never stop saying something.

- The Presentation of Self in Everyday Life (Dr. Erving Goffman)

Here's a little experiment for you to try. Record 15 minutes of a soap opera or other show that you don't usually watch. Now watch it with the sound muted and see how much you can follow. Chances are that you'll miss out on the fine details, but you'll be able to follow the general gist of the storyline - even without the words. Actors are trained to project emotion using their body language, gestures and facial expression as much as they do their words and tone of voice. It's not difficult to recognize anger, fear, joy, attraction and even more subtle interplays just by watching the way that the actors look at each other, position themselves and move around each other.

People in real life do the same thing. Take a look around you in a restaurant or on the bus. Can you pick out the couple that's arguing with each other? The best friends sharing an intimate conversation? The couple who's just met for the first time? The salesman treating a customer to lunch? It's far easier than you think. It's just a matter of watching their bodies and faces as they talk to each other.

The Origins of Body Language

Communication consists of more than spoken words. When you have a conversation, only part of what you're saying and hearing is conveyed through speech. The communication actually starts long before the first words are spoken. Before you open your mouth to say a word, the people around you have already begun to form their impression of what you're going to say. Everything about you from the clothes you chose to wear to the way you lift your hand gives them clues to how you see yourself and how you see them. Obviously, if you could control the subtle nuances - and read them from other people - you'd be more in control of the conversation and interaction, because you'd understand all the hidden messages that you're not hearing.

Long before infants learn to use words, they are communicating with the world around them. Scientists speculate that some of this communication is inborn and instinctive. They point to similar ways that animals communicate with each other by facial expression, body positioning, head tilting and other gestures. Psychologists studying language and communication have observed complex interactions and exchanges between toddlers that use no words whatsoever. As we get older, they speculate, these early ways of communicating with each other don't disappear. Instead, they 'go underground' - becoming silent signals that we pick up and send without being aware that we're using them at all. When what we're saying doesn't match what we're thinking, our bodies tend to give us away in the subtle gestures and postures that we don't know we're using.

Scientists and anthropologists have been studying body language and communications in both animals and humans for a very long time. Because of those studies we know that animals communicate with each other through body language. When a dog rolls over on his back and presents his belly to another dog, we know that he is telling the other dog that he knows who the boss is. When a cat twitches the tip of its tail, we know that something has irritated it. We even know when a pigeon is in the mood for love - he struts his stuff in front of the ladies in much the same way that human males do.

Humans are no different. There are gestures, expressions and motions that we use in everyday life that communicate as much as the words that we use. Some of them are universal. Some only make sense within the context of a particular society, and some are individualized. Knowing and understanding the unspoken rituals and customs of body language can help you gain acceptance in a new country - or a new workplace.

Some people make their living by reading those cues that others miss. A professional gambler relies on more than just the cards in his hand. Winning gamblers look for 'tells' in their opponents and cultivate a 'poker face' in themselves. They to guess at what the other players at the table are holding in their own hands. Over time, a good gambler learns to see and read subtle hints in the way a person holds his cards, how he looks at others around him, whether his foot taps under the table.

Some signals that they notice are universal and almost impossible to control - the slight widening of the eyes and dilation of the pupil when we see something we like, for instance. Others are more individualized. A particular player may always smooth a finger over his brow when he's betting on an especially good hand, for example. Most people sit up just a little straighter and lean in just a tiny bit more when they are confident of themselves. By recognizing those gestures, the body-aware gambler can gauge whether to bet or fold.

At the same time, a good gambler has to be aware of his own tells. If he knows that he always touches his chin when he's bluffing (and that's a very very common gesture that accompanies lying), he can fake other gamblers into believing that he's bluffing by imitating his own tell - and clean up when they up the ante on his royal flush.

The same tricks that gamblers use to win at poker can help you win at life. By learning how to listen with your eyes, you can pick up the subtle cues that tell you when someone is receptive to you, or change the direction of your conversation when you notice someone's attention is wandering. At the same time, you can make your own communication more effective by paying attention to the way your face, hands, body and legs tell others what you're really saying.