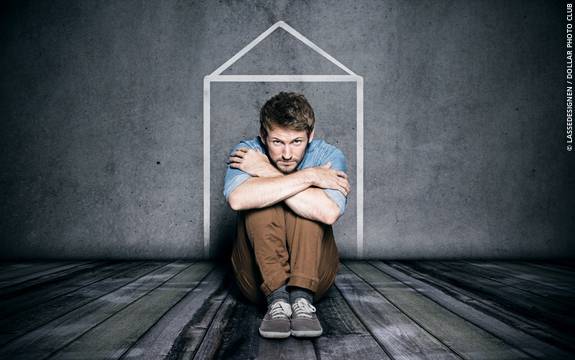 Homer Collyer (1881-1947) and Langley Collyer (1885-1947) were two US brothers that became famous because of their reclusive and hoarding lifestyle.

Both were sons of gynecologist Herman L. Collyer and Susie Gage Frost Collyer. The family lived in a three-story house on Fifth Avenue and 128th street in Harlem, New York City, New York. Homer got a degree in engineering and Langley became a lawyer, although he mainly concentrated being an inventor.

Herman Collyer left his family and the house 1909. When he died 1923, his wife inherited all of his furniture, medical equipment and books and took them to the house. Susie Collyer died 1929 and the brothers inherited everything. But as crime increased in Harlem, the brothers retreated more and more into their house.

Robbers tried to break into the house many times because of unfounded rumors of valuables. As the brother's fear increased, so did their eccentric lifestyle. They boarded up the windows to their house and set up booby traps. Their gas and water was turned off because they refused to pay and they used only a small heater. Langley begun to wander outside at night and fetched their water from a water post four blocks away. He also dragged home anything he found interesting.

In 1933, Homer went blind. Langley devised a diet of one hundred oranges a week, along with black bread and peanut butter. He also began to hoard newspapers so that when Homer would have regained his sight, he could catch up on the news.

The Collyer brothers were first mentioned in the newspapers when they got in trouble with the bank in 1942 after they refused to pay their mortgage on the house. Langley eventually wrote out a check after police had come crashing in the front door, only to be stopped by the huge pile of junk set up to keep people out.

The brothers didn't make the news again until March 21, 1947 when an anonymous caller phoned to 122th police precinct and insisted there was a dead body in the house.

Looking for the Brothers...

The police had a hard time getting into the house at first. Eventually they had no choice but to begin to pull out all the junk that was blocking their way and throw it out onto the yard.

A patrolman William Baker finally broke in through a window into a second-story bedroom. After two-hour crawl he found Homer Collyer dead, with his head on his knees, wearing just a bathrobe. Outside, a crowd of 600 had gathered, curious about the junk and the smell.

Langley was nowhere to be found. Homer was taken to a morgue where was found to have died of starvation and cardiac arrest. The coroner estimated that Homer had been dead for about ten hours.

In their quest to find Langley, the police began the long task of taking out all the junk in the house. It included rope, baby carriages, rakes, umbrellas, rusted bicycles, old food, potato peelers, collection of guns, x-ray machine, thousands of books about medicine and engineering, a horse's jawbone, human organs pickled in jars, one UK and six US flags, 14 pianos, a clavichord, two organs, and more and more newspapers. Police also found 34 bank account books with a total of $3007.18. For weeks there was no sign of Langley.

Finally on April 8, 1947, workman Artie Matthews found the dead body of Langley Collyer. It turned out he was only ten feet from where Homer had died. Three huge bundles of newspapers covered his body. Langley had been crawling through their newspaper tunnel to bring food to his paralyzed brother when his own booby trap fell down and crushed him.

In total, police and workmen took 136 tons of garbage out of the house. Estate of the Collyer brothers was valued at $91,000; $20,000 in personal property. All the junk was auctioned and eventually the house was torn down as a fire hazard.

Do you have a Phobia?

Learn to overcome your fear:

Overview to Rational Emotive Therapy as a treatment in psychology. Includes...

Introduction to reductionism as a technique in psychological research.