A Case of Claustrophobia

How W.H.R. Rivers helped a sufferer of claustrophobia in the trenches during World War I. 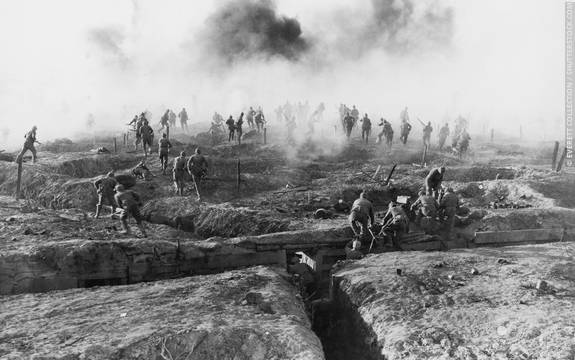 Claustrophobia is a fear which can severely impact on sufferers’ lives. Generally understood to be an irrational fear of closed or confined spaces, where the opportunity to escape is limited, it can lead to anxiety in many everyday situations.

A person suffering from claustrophobia may feel uncomfortable being confined in a taxi, walking through a narrow corridor, using elevators or occupying other confined situations. However, this aversion to particular situations is not limited to rooms which are confined - claustrophobics may feel anxious in a crowd of people in a large, open space if they are unable to move freely.

This feeling of being trapped in a confined space or environment is estimated to affect around one in ten people in the UK1 and can lead sufferers to experience fright, anxiety and even panic attacks. As people encounter enclosed places on a daily basis, claustrophobics often find it difficult to function normally and may avoid environments that could trigger their fear.

One of the most detailed documentations of a case of claustrophobia was written by W.H.R. Rivers (1864-1922), a British psychiatrist who worked with traumatised men returning from the frontline during and following the First World War. Rivers believed that the traumatic nature of war mean that soldiers would need to routinely repress emotions and experiences in order to carry out their duties:

"There are few, if any, aspects of life in which repression plays so prominent and so necessary a part as in the preparation for war. The training of a soldier is designed to adapt him to act calmly and methodically in the presence of events naturally calculated to arouse disturbing emotions. His training should be such that the energy arising out of these emotions is partly damped by familiarity, partly diverted into other channels." (Rivers, p. 186)

William Halse Rivers Rivers was born in Kent, England in 1864. He studied medicine at the University of London in 1886. In 1897, he accepted position as lecturer in Physiological and Experimental Psychology at the University of Cambridge. During the First World War, Rivers treated many soldiers for shell-shock, most notably the poet Siegfried Sassoon, who he would later become close friends with. With a keen interest in anthropology, Rivers also made an expedition to India and published a study of the local Todas population in his 1906 work The Todas. He also served as president of the Folklore Society. Rivers died in 1922 aged 58.

Rivers’ description of a claustrophobic client, who had found the confinement of trenches during the war an unbearable experience, was originally published in the journal The Lancet in 1917 and later featured as an appendix to his 1920 work Instinct and the Unconscious. The client was a thirty-one year old man who worked in the medical profession and had been called to serve in the army following the outbreak of the First World War (1914-1918).

When he sought help from Rivers, the man was suffering from claustrophobia as well as a stutter. He had believed that his fear of enclosed spaces was normal until he was sent to the trenches and saw colleagues living fearlessly in such a confined environment. The man was less comfortable and experienced what Rivers described as “trench fever”, pacing anxiously through the trenches instead of sleeping in them.

His claustrophobia did not originate in the environs of war, however. From an early age, the man recalled situations in which he had experienced feelings of claustrophobia. He recalled sharing a box-bed with his brother aged six, sleeping against the wall, resulting in claustrophobic feelings which he could not escape for fear of waking his brother. Instead, he would endure many anxious nights worrying whether he would be able to escape the situation if necessary.

Witnessing miners descend into a coal mine during childhood had also played on the man’s mind, leading to thoughts of being trapped in the mine. This fear become more generalised to cover other tunnels, leading him to become anxious when travelling through train tunnels, and insisting on sitting close to an exit route when visiting a theatre.

The man also suffered from anxiety in other forms - he would worry for no apparent reason and around the age of twelve, he described developing a stutter which would remain with him in adulthood. He would experience an inability to sleep, eat or work, which would affect his initial attempts to study medicine around the age of twenty-two, although he would later succeed in his academic ambitions.

Before finding Rivers, the man had sought help from a German psychoanalyst whom he stayed with initially for two weeks Vienna. Rivers noted how the therapist had been heavily influenced by the ideas of the father of psychoanalysis, Sigmund Freud, and emphasised the influence of repressed memories of a sexual nature on patients present issues.

The therapist attempted dream interpretation and free association, a technique which prompts subjects for a spontaneous reaction to a given word or topic in an effort to uncover repressed or subconscious ideas. However, when interpreting the man’s dreams, Rivers discovered that the therapist’s emphasis on sexual urges or trauma clouded his understanding of his patient’s condition:

“When he related his dreams they were invariably interpreted by means of symbolism of a sexual character. Thus, if he had dreamed of water, he was told that this indicated a wish for sexual intercourse. It is a striking feature of the process of examination and treatment to which the patient was subjected that it failed to discover the special dread of closed spaces from which he suffered.” (Rivers, p. 172)

Like the first psychoanalyst, Rivers maintained an interest in early traumatic events, but was skeptical of Freudian psychodynamic approach which emphasised the symbolism in interpreting dreams.

Instead, Rivers recovered childhood memories which he believed may have directly contributed to the man’s fears.

As a child, the man and his brother had kept rabbits, and he had sought to irritate his sibling by hitting one of the rabbits, rendering it unconscious. The brother took revenge on him, and later, whilst consulting Rivers, similar events would become the subject of his dream content, which Rivers asked him to relay to him. In the dream, the man was in France being chased by someone down a hole. Instead of hitting him, however, the aggressor killed a rabbit, and threw it into a pond, but the rabbit came back to life, becoming a source of fear in the dream.

The man also recalled other memories, in which he himself, and other children, were drowning animals, and he feared for the animals coming back to life afterwards. Even visiting the pond close to his home, where one of these memories had taken place, caused the man to worry.

On another occasion, the man remembered a rag-and-bone man who had lived close to his parents as a child. He and other boys would bring objects to the man, who would pay them a halfpenny as a reward. To reach the man’s home, he had to walk halfway down an enclosed alleyway before taking a turn. After bringing an object to sell to the man one time, however, he left to find the door at the end of the alleyway shut, leaving him trapped with a dog in the enclosed space.

After recalling the event, which Rivers attributed to the man’s claustrophobia, this new understanding of his claustrophobia brought “comfort” to the man, and the therapist noted that his suffering as a result of the claustrophobia was greatly reduced, but that the stammer that he had sought the therapist’s help for initially had remained, resulting in the partial success of their sessions.

Rivers saw many patients suffering from their experiences in the trenches of the War, and blamed the stress of war for surfacing other earlier traumatic experiences in numerous clients:

"...many of the most trying and distressing symptoms from which the subjects of war-neurosis suffer are not the necessary result of the strain and shocks to which they have been exposed in warfare, but are due to the attempt to banish from the mind distressing memories of warfare or painful affective states which have come into being as the result of their war experience." (Rivers, p. 187)