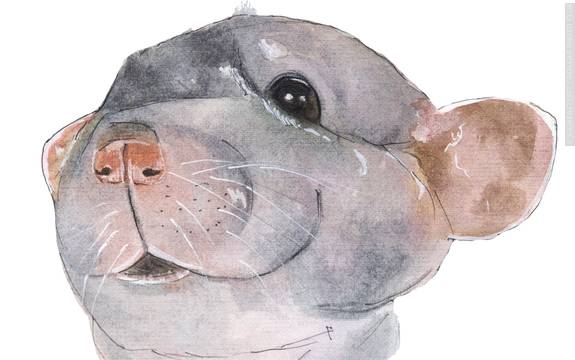 The case of a patient’s obsessive thoughts inspired Sigmund Freud to share his observations in the 1909 case study Notes upon a Case of Obsessional Neurosis.1 Referring to the man using the pseudonym ‘Rat Man’, Freud describes in depth how persistent, obsessive thoughts led him to irrational, compulsive behavior, such as cutting his own throat with a razor blade. He investigated the cause of Rat Man’s ‘obsessional neurosis’, which he attributed to events which had occurred early in the patient’s childhood but that had a lasting effect on his present state.

There is some debate as to the real identity of Rat Man - he has been variously identified as a man named Paul Lorenz, but is more generally accepted to have been Ernst Lanzer, who was born in Vienna in 1878 and attended university, training as a lawyer.

He suffered for many years with his problem before seeking professional help.

In 1907, having read with interest numerous works of Freud and been impressed by his discussion of “curious verbal associations”, Rat Man finally approached the psychoanalyst. Freud noted that it was usual for patients to have suffered for some time before consulting a doctor, by which time the symptoms had become more noticeable. Rat Man claimed that hydrotherapy, a popular activity at the time which involved bathing, had helped with the problem, but that his relations with a person at the baths, rather than the ‘therapy’ itself, had likely been of help.

Rat Man complained of obsessive thoughts which would surface for no apparent reason in his mind. These thoughts, often of misfortune occurring to a relative or someone close to him, would persist until he took a particular irrational action to placate the risk.

Freud described the man’s case as a “moderately severe” of “obsessional neurosis” and found his problems more difficult to comprehend than those of his clients with hysteria, such as the oft-quoted case of Anna O.

During his sessions with Freud, which lasted at least 6 months, the man recounted numerous events that had occurred in his life from his childhood up to those which were troubling him at present. Freud also engaged his patient in free association - revealing everything that entered his mind without filtering ideas which he would otherwise repress. By gaining an insight into the man’s stream of consciousness, Freud hoped to identify any signs which suggested the repression of traumatic events or feelings in the man’s subconscious.

The main subject of Rat Man’s obsessive thoughts was the irrational fear of the death of his father. He felt that by carrying out an action, however, bizarre, he could prevent such an event occurring.

A situation which demonstrated Rat Man’s worries, and later helped him to earn his pseudonym from Freud, occurred during military service. He worked with a lieutenant who was known to have a sadistic streak and to be defender of corporal punishment. In an anxious state, Rat Man told Freud how one day, the lieutenant relayed to him a particularly cruel form of punishment, which involved placing a container of live rats on a person who was laid down. The rats would seek to escape confinement by digging through the victim. This idea, however repulsive to him, then became the subject of his obsessive thoughts and he began to fear it happening to his partner or his father. Once the idea had entered his mind, the man was unable to placate the irrational fear of this happening to a friend or relative.

The irrationality of Rat Man’s fears was further demonstrated when he lost his pince-nez (bifocals) and placed an order for a new pair to be sent through the post. His retelling to Freud was complex and caused some degree of confusion. To summarize, the person collecting the parcel from the post office was expected to pay for it. Rat Man’s colleague informed him that another lieutenant had paid the fee for him, and that he should pay him back. After learning this, Rat Man irrationally convinced himself that he must personally pay back the lieutenant otherwise his friend or relative would receive the torture involving the rats.

To resolve his fears, Rat Man would normally carry out an action to prevent them (as he feared) from happening. However, the lieutenant declined to take the money, saying that he had not paid the fee at the post office. Fearing that not paying him the money would result in the torture, he formulated a complex plan involving him, the lieutenant and a colleague travelling to the post office and carrying out a chain of transactions which would mean that he could pay the lieutenant and prevent harm to his father or partner.

Although Rat Man’s solution was difficult to understand, his colleagues eventually travelled to the post office in order to put their friend at ease.

During his sessions with Rat Man, Freud looked at his client’s history, investigating events which took place during his childhood, with a view that they may have been at the root of his obsessive thoughts.

Rat Man described becoming sexually aware at an early age and recalled a desire to see women whom he knew naked. According to Freud’s psychodynamic theory of wish fulfillment, the early development of this desire originated from the man’s id, a component of the psyche which influences us from birth, prior to the ego and superego developing, which temper the desires of the id. As the superego began to exercise influence over his thoughts, Rat Man felt guilt at having experienced such unacceptable desires and this conflict between the id and the ego lead to the wish being repressed later in life. He also recalled to Freud having experienced a fear of his parents knowing his thoughts, reflecting the discomfort he felt at having held such wishes.

Freud emphasized that repressed thoughts are not simply forgotten: they lose their “affective cathexis” but retain their “ideational content” in the conscious. When an irrational fear a rises, Freud believed that this content must be substituted for something else - in the case of Rat Man, irrational compulsions to prevent anxious thoughts being realised.

The man realised the irrationality of his fears of misfortune occurring to his father, but this did not prevent the obsessive thoughts from affecting him. Freud noted that he experienced these thoughts from childhood and even for years after the death of his father from emphysema, whose final day he had not witnessed, adding to Rat Man’s irrational sense of guilt.

After spending months engaging in sessions of psychoanalysis with Rat Man, Freud claimed that he had resolved his client’s obsessions and he was able to end treatment. This outcome would not last long, however, as Freud noted that just a few years later, Rat Man would be killed in the First World War.

The Case of Little Hans
How Freud used a boy's horse phobia to support his theories.
Wolf Man
A history of Wolf Man, a client of the psychoanalyst Sigmund Freud.
Anna O: Sigmund Freud's Case History
The life and case study of Anna O: how Sigmund Freud was influenced by one woman's experiences.