What happens to make us stressed? Find out what a popular theory on stress explains how it aids our survival, and what a folklore story says about the topic. 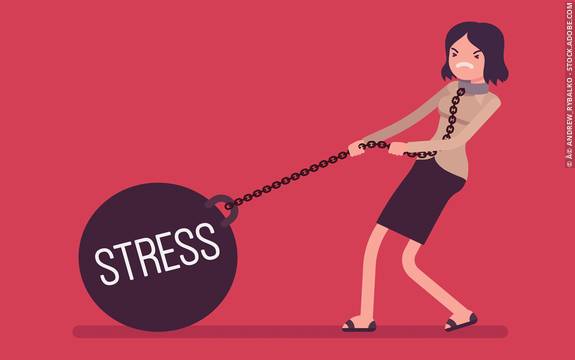 Stress (roughly the opposite of relaxation) is a medical term for a wide range of strong external stimuli, both physiological and psychological, which can cause a physiological response called the general adaptation syndrome, first described in 1936 by Hans Selye in the journal Nature.

Selye described the general adaptation syndrome as having three stages:

Stress can directly and indirectly contribute to general or specific disorders of body and mind. Stress can have a major impact on the physical functioning of the human body. Such stress raises the level of adrenaline and corticosterone in the body, which in turn increases the heart-rate, respiration, blood-pressure and puts more physical stress on bodily organs. Long-term stress can be a contributing factor in heart disease, high blood pressure, stroke and other illnesses.

The Japanese phenomenon of karoshi, or death from overwork, is believed to be due to heart attack and stroke caused by high levels of stress.

Serenity is a disposition free from stress.

About the time of Selye's work, the gradual realization dawned that age-old if sometimes ill-defined concepts such as worry, conflict, tiredness, frustration, distress, overwork, pre-menstrual tension, over-focusing, confusion, mourning and fear could all come together in a general broadening of the meaning of the term stress. The popular use of the term in modern folklore expanded rapidly, spawning an industry of self-help, personal counselling, and sometimes quackery.

The use of the term stress in serious recognized cases such as those of post-traumatic stress disorder and psychosomatic illness has scarcely helped clear analysis of the generalized 'stress' phenomenon. Nonetheless, some varieties of stress from negative life events, or distress, and from positive life events, or eustress, can clearly have a serious physical impact distinct from the troubles of what psychotherapists call "the worried well".

10 Causes of Stress (and How to Avoid Them)
What events cause the most stress and how can we avoid them?
Stress Management
How stress management works.
Stress
Stress psychology articles and self-assessment tests.