What our non-verbal signals tell people about us. 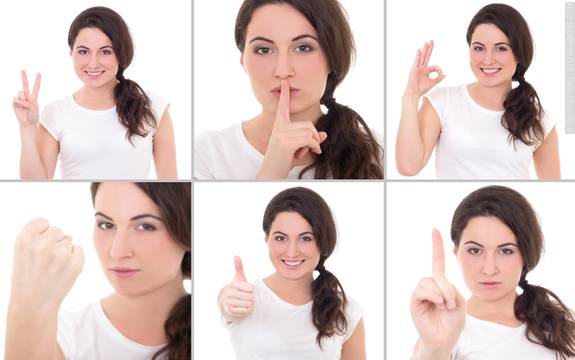 There are certain clues that people exude which will help you to understand how they are feeling. These don't apply to everyone in every situation; however they should help to give a general evaluation.

This indicates defensiveness, as though the person is trying to protect him or herself. This non-verbal language is saying 'don't touch me'.

This indicates that the person is feeling very confident, especially if the ankles or legs are crossed - it indicates 'come on - challenge me'.

This person is impatient and wants you to hurry up and get to the point, so that they can have their say.

Chin stroking signifies that someone is trying to make a decision - they're going to take their time in thinking of a suitable response because they don't want to get it wrong.

Hair pulling or curling it around fingers

This is a sign of insecurity or lack of confidence - it's as though this person doesn't know what to do with their hands; which may give off tell-tale signals, so the hair can occupy the fingers instead.

This is often a sign of disbelief - this person is saying 'I can't believe my eyes' - so they rub them to clear away any cloudiness in their vision or thought process.

This usually means that the person is attentive and interested in what you have to say. (It can also signify hearing impairment).

Head in Hands - Eyes Down

Sitting in this position indicates boredom - it's as though they have to hold their head up to keep on listening - it can also indicate tiredness.

Often this is taken as a sign of authority or aggression. This person is getting ready to confront.

The nose being the furthermost extremity of the face is extremely sensitive to minute sensations which make it almost impossible to resist responding to. These sensations are often felt when a person is not being entirely truthful, therefore you should be ready to suspect the validity of what this person is saying.