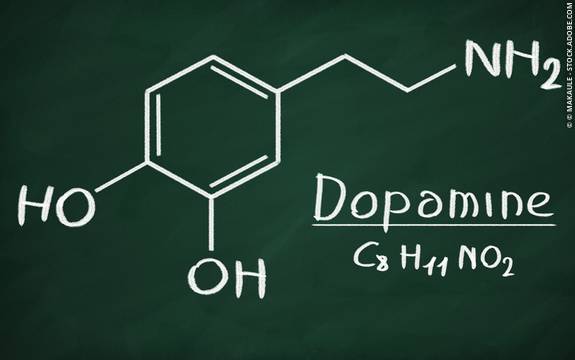 Dopamine is one of many important neurotransmitters:

Dopamine plays a critical role in the way our brain controls our movements and is thought to be a crucial part of the basal ganglia motor loop. Thus, shortage of dopamine, particularly the death of dopamine neurons in the nigrostriatal pathway, is a cause of Parkinson's disease, in which a person loses the ability to execute smooth, controlled movements.

Role in Pleasure and Motivation

Dopamine is commonly associated with the 'pleasure system' of the brain, providing feelings of enjoyment and reinforcement to motivate us to do, or continue doing, certain activities. Certainly dopamine is released (particularly in areas such as the nucleus accumbens and striatum) by naturally rewarding experiences such as food, sex, abuse of drugs and neutral stimuli that become associated with them. This theory is often discussed in terms of drugs (such as cocaine) which seem to directly produce dopamine release in these areas, and in relation to neurobiological theories of addiction, which argue that these dopamine pathways are pathologically altered in addicted persons.

However, the idea that dopamine is the 'reward chemical' of the brain now seems too simple as more evidence has been gathered. Dopamine is known to be released when unpleasant or aversive stimuli are encountered, suggesting that it is not only associated with 'rewards' or pleasure. Also, the firing of dopamine neurons occur when a pleasurable activity is expected, regardless of whether it actually happens or not. This suggests that dopamine may be involved in desire rather than pleasure. Drugs that are known to reduce dopamine activity (e.g. antipsychotics) have been shown to reduce people's desire for pleasurable stimuli, despite the fact that they will rate them as just as pleasurable when they actually encounter or consume them. It seems that these drugs reduce the 'wanting' but not the 'liking', providing more evidence for the desire theory.

Other theories suggest that the crucial role of dopamine may be in predicting pleasurable activity. Related theories argue that dopamine function may be involved in the salience ('noticeableness') of perceived objects and events, with potentially important stimuli (including rewarding things, but also things which may be dangerous or a threat) appearing more noticeable or more important. This theory argues that dopamine's role is to assist decision making by influencing the priority of such stimuli to the person concerned.

Disruption to the dopamine system has also been strongly linked to psychosis and schizophrenia. Dopamine neurons in the mesolimbic pathway are particularly associated with these conditions. This is partly due to the discovery of a class of drugs called the phenothiazines (which block D2 dopamine receptors) which can reduce psychotic symptoms, and partly due to the finding that drugs such as amphetamine and cocaine (which are known to greatly increase dopamine levels) can cause psychosis when used in excess. Because of this, all modern antipsychotic medication is designed to block dopamine function to varying degrees.

Evaluation Of The Biological Approach

Can the Biological Approach explain our behavior? Decide for yourself with the...

Seratonin's role in anxiety and depression.

Can removing parts of the brain via a lobotomy cure mental illnesses? Read an...

Types of headaches and treatments explained, including exploration of Ice Cream...