Can removing parts of the brain via a lobotomy cure mental illnesses? Read an evaluation of this controversial treatment. 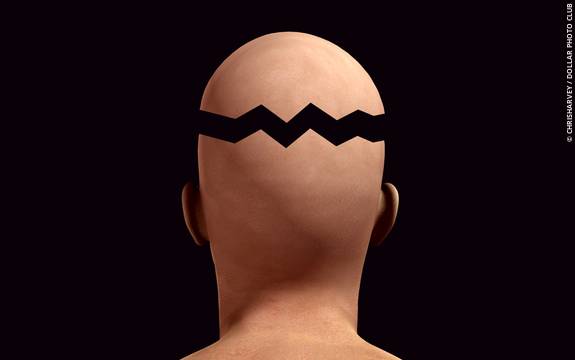 Perhaps the lobotomy (the removal of parts of the brain) is the most controvertial of treatments that have been developed over the past two centuries for mania and depression. And what is even more bizarre is the results that lobotomies have produced. Here, we'll look at the accident that sparked the revolution in psychosurgery and its development over the past hundred years as a viable form of therapy...

The explosives accident that sparked it all...

Phineas Gage was a mild-tempered man from Vermont, USA, earning an honest living as a foreman during the construction of America's railroads in 1848. All was fine until an explosive charge was accidentally detonated, sending a 3-foot long rod of metal into one end of Gage's head and out of the other. The penetration, from a cheek to the top of his head, inevitably went through his brain. Gage was lucky to have survived this accidental lobotomy with the loss of an eye, and most of his cognitive abilities such as memory remained in tact, but a strange personality change occurred: Phineas became almost childish in his behavior, unwilling to listen to others and often using obscenities.

The part of Phineas' brain that had been destroyed by his experience was the orbitofrontal cortex the part which has been attributed to animal/human emotions. Could removing this part of the brain actually benefit people with overly-strong emotions, and help those suffering anxiety and depression? Later lobotomists would find out...

Phineas Gage's change in personality meant that he was virtually unemployable, and reports claimed that he ended up as a sight at a circus. His legacy lived on, however, and Gage's revelations about the function of the orbitofrontal cortex lead to important and even more fascinating research over the next century:

Jacobsen, Wolfe & Jackson put the lobotomy to the test on a chimpanzee called Becky. In removing the frontal lobe of her brain, they managed to make her immune to any distress that she would normally endure when she made mistakes. When made to take a test in a chamber, instead of being upset as she would have been previously, she behaved cheerfully.

The congress of summer, 1935 brought together the cream of the world of neurology. Among the attendees were Antonio Moniz, a Portugese neuropsychiatrist, his admirer-to-be, Walter Freeman; and Fulton, whose lobectomy of animals (the removal of the frontal lobes of the brain) stunned the visitors. After a demonstration and great deal of debate of Fulton's discoveries, Moniz suggested the application of the lobectomy to humans. The crowd was shocked, but by September of the same year, Moniz had attempted the operation on a woman patient from an asylum. The woman's mental faculties were damaged after the operation, but the paranoia that she had previously from was lessened. Moniz later published his findings, attempting to present his operations in a positive light, and again gained the interest of the 1935 conference attendee, Walter Freeman, who would continue his work into later years.

More on Moniz: Did you know?

Away from his life in revolutionizing the world of lobotomy, Antonio Moniz enjoyed quite an influence in world politics. He helped end World War I in signing the Treaty of Versailles and served as an ambassador, but was eventually rewarded for his neurological achievements in 1949, with an award of the Nobel Peace Prize.

Moniz was eventually shot and murdered by one of his lobotomy patients.

Freeman was a US neurologist who was keen to experiment with lobotomies, and after reading Moniz's findings, was encouraged to collaborate with a surgeon colleague who was qualified to operate on patients, James Watts. The woman they operated on, an American with severe depression, underwent the surgery (her last concern being of her hair being cut off), and awoke carefree. Although side-effects of bad communication became apparent a week later, they soon disappeared and the woman appeared cured.

It was after the Second World War that a real need to treat new victims of war-related disorders such as shell-shock and severe depression became apparent. Lobotomies grew in popularity, and by 1955, tens of thousands of people had undergone the operation.

Despite the risks and adverse effects that were witnessed in previous patients, lobotomies remain a valid, if rare, form of treatment today. Instead of removing parts of the brain as Phineas had endured, the first lobotomies used alcohol to sever the fibers that linked the frontal lobe to the rest of the brain. Today, lobotomies are used often to treat epilepsy, and those such as the amygdalotomy use drills to create a hole in the head.

Biological Psychology
Biological psychology articles, research evaluations and outlines.
Brain Explorer
Discover what each part of your brain does and how it functions with the new interactive Brain Explorer.
How Drugs Affect Us: Cells
How do drugs that affect our mood (for example, Prozac for depression) and the way we behave work?