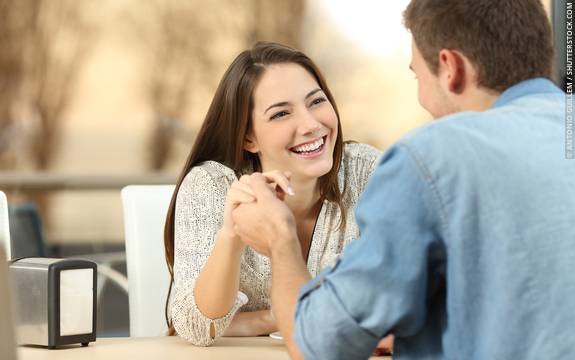 You've just met the girl of your dreams and are sitting there talking to her. Are there ways that you can tell if she returns the interest? You bet there are. Flirting and courting behavior is one of the most studied of all aspects of body language. Here are some of the most common 'interest' signals that women use when interacting with men in a flirting situation.

- Where is she sitting?

When a woman wants to be more intimate with someone, she'll choose to sit beside them rather than across from them. If you take a table at a restaurant, and she takes the seat beside you, she wants to get to know you better.

- How is she sitting?

When a woman sits with one foot tucked beneath her, she's feeling comfortable in the conversation. Legs crossed at the knee or thigh usually indicate interest - unless the foot on the crossed leg is twisted around behind the other leg. Then it's a clear signal that she's feeling uncomfortable and protecting herself from you.

- What are her feet doing?

If her foot is swinging up and down or back and forth rhythmically, she's probably bored. If she's sliding her foot in and out of her shoe, she's comfortable and receptive to your interest. If she's got her ankles crossed tightly together, back off. You've made her nervous and anxious.

- Where are her arms?

When a woman feels uncomfortable or attacked, she'll usually cross her arms over her chest protectively. If one or both arms are resting on the table in a relaxed, open position, she's feeling comfortable and safe with you.

- What are her hands doing?

Our hands give us away more than any other part of our bodies. When a woman is interested and flirtatious, she'll often make gestures that expose the palm of her hand. Her hands will often move to her face, and she may rest her chin on a cupped palm and unconsciously touch or stroke her lip. If she's really interested, her hand may be in her lap, fingers stroking her thigh, or she may be running her fingers up and down the side of her glass. The more seductive her hand motions are - especially her unconscious ones - the more likely it is that she's interested in you.

- Where are her eyes?

When we're interested in someone and what they're saying, our eyes tend to focus within the triangle from their eyes to the center of their chest. If she's interested in you, she'll keep her gaze within that triangle, making eye contact for several seconds to a minute or so at a time, then breaking contact to look downward and inward. If her gaze lingers on your lips, she's definitely interested and receptive to what you're suggesting - both verbally and non-verbally.

Another eye cue is pupil size. When we see something that we like, our eyes widen, the brows lift slightly and our pupils dilate. It's a natural, involuntary reaction and it usually only lasts for a few seconds after the object of attraction catches our eye. The pupil dilation, though, tends to last longer. It's an almost surefire cue that she's interested in you.

- How is her body positioned?

When we like what we see and hear, we tend to move toward it. Is she leaning slightly toward you? Are her knees pointed in your direction? Is her body angled toward you rather than away from you? If so, chances are that she's interested.

- Is she mirroring you?

We also tend to mirror the actions of those that we are in agreement with. Want to test her interest and attraction? Pick up your drink and take a sip. If she's interested, chances are good that within a minute or so, she'll do the same. Change your body position slightly - lean in toward her. If she leans in also, you've definitely caught her attention.