What is cold reading and what's the psychology behind it? 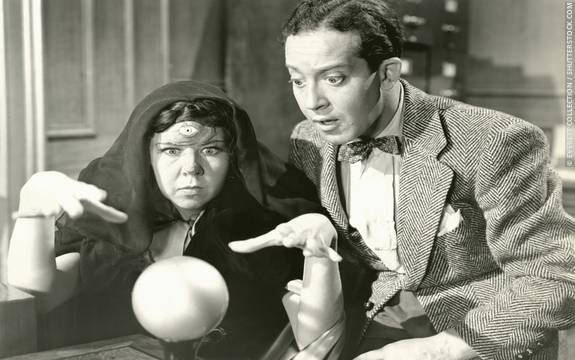 By Faith Waude DHP: Have you ever wondered how so called psychics and mediums, or indeed, our Cold Reading Test, can give such accurate readings?

Do they really possess this supernatural power or have they gleaned their information from outside sources?

In this article I will attempt to explain possible reasons for their success. As I am not an expert on this subject I would ask you retain an open mind – read what is said and make your own evaluation of whether you think it could be true or not.

In communicating with others we rely on non-verbal and verbal skills. In fact you may be surprised to know that a huge 80% of the information is non-verbal.

This isn’t so surprising once we remember that in primitive times, (before language was even thought of) non-verbal communication was the only way of understanding human beings.

If you met an old acquaintance in the street and asked how they were, and with a grimace on their face they responded ‘I’m okay’, how likely would you be to believe them?

Many of our impressions of others are gleaned on an unconscious level and some people are naturally good at reading body language. One such person was the famous psychiatrist and hypnotherapist Dr. Milton Erickson who spent long periods confined to bed because of his affliction by polio.

During these periods Erickson observed people’s mannerisms, conversation and behaviour and became adept at understanding them. He later applied his skills to colleagues, patients, friends and family.

One particularly amusing anecdote that springs to mind was when a beautiful woman walked into his office without an appointment to see ‘if he was the right psychiatrist for her’. Erickson observed her picking a piece of lint off her sleeve and assured her that he was.

After being questioned on his arrogance Erickson offered to demonstrate how he know this by asking her a simple question that he thought she didn’t want him to ask.

That question was: ‘How long have you been wearing women’s clothes?’

He had observed the man’s lack of ‘detour’ whilst picking the lint off his sleeve, remembering how, even before the development of breasts, his daughter Betty Alice had to move her arm in a certain way when taking something off the bookcase.

Observation is clearly important when reading body language but there are many other ways that ‘psychics’ work.

If you’ve ever been to a concert hall and watched and listened to psychics, mediums, spiritualists or whatever name you’d like to apply to them giving a demonstration of their ‘powers’ then you may have noticed how they throw a huge quantity of information out to the audience waiting for a reaction (and from dozens or hundreds of people they are almost guaranteed to have a hit somewhere).

Such a statement could be – ‘I have an elderly gentleman here who suffered with his heart. He was overweight with grey or silver hair and I get the name Mary or May associated with someone close to him’.

When someone raises their hand the medium might continue.

He was your father or grandfather – (and, if they see a lack of recognition in the face of the person with the raised hand they might continue – ‘or was a fatherly figure in your life’.

So the information is narrowed down – other information is offered or the statement given ‘I’ll leave that with you to think about’. Much of what is said is ambiguous but the distressed person who is thinking of the heart attack victim may only remember afterwards the applicable content of the ‘reading’. That method is known as ‘shotgunning’.

This technique is named after a shotgun, as it fires a spray of small projectiles in the hope that one or more of the shots will strike the target. A majority of people in a room will, at some point for example, have lost an older relative or known at least one person with a common name like "Mike" or "John".

I’m going to digress a little now but I remember when I was much younger attending a transfiguration session at a local spiritualist church. Here the lights were dimmed and special effects were produced as the medium on stage took on personalities of diseased relatives of the audience.

I could hear people saying in the audience things like:

‘That’s Uncle Arthur’ – another person ‘That’s my Edna’ and yet another ‘It’s great Uncle Harold’. All this was being said at the same time by different members of the audience – people were seeing in the medium what they wanted to see.

Another method, known as the Rainbow Ruse, offers contradictory statements such as:

You are very kind and considerate most of the time but if something angers you then you can fly off into a temper:

Who couldn’t relate to that?

A variety of personality traits and their opposites are vaguely linked to time or mood or potential and will strike a chord in most people.

So, how did we evaluate your personality in the reading?

If you haven't taken the reading test, take it here

It may have been very accurate (or not). The fact is that some people will relate to much of what was said and this is because the majority of us have the same basic experiences, emotions, hopes and aspirations.

We all (or most of us) want to be liked. We all have something in common with others, some to a greater and others to a lesser degree.

The method that was used for your report was based on the Forer effect, commonly known as the Barnum statement (named after the American showman, P.T. Barnum).

The statements may seem personal but they can apply to many people and whilst seemingly specific, they are often open-ended.

If you are interested in learning more about Cold Reading then I highly recommend Derren Brown’s book ‘Tricks of the Mind’.

Take the psychology reading test and see what cold reading could say about you.