Personality types according to Freidman and Rosenman. 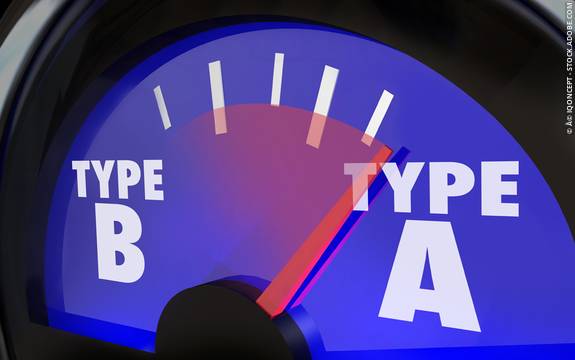 The personality types proposed by cardiologists Friedman & Rosenman distinguish between groups people based on the way in which they cope with stress:

Which type am I?

Of course, not everybody can be classified as either Type A, B or C personalities as we react differently in different situations, and all of us feel stressed at some point in our lives. If you think you are a Type A personality, there are 3 sub-categories you might fit into:

What does it matter which type I am?

Personality Type A people are liable to succeed due to their ambitious, 'never-give-up' nature, but are less able to manage stress, and studies have shown that they are at a higher risk of CHD than people of the other categories. The Western Collaborative Group Study measured people's personality types in 1960, and classified them as either A1, A2, X or B type personalities. Eight and a half years later, the same people were re-contacted and a number of them - as any normal population sample would - had developed CHD. What shocked psychologists was the correlation between personality type and suffering from the disorder; 70% of those diagnosed had previously been classified as possessing Type A personas.

Later research has looked at why Type A personalities are more likely to suffer cardio-vascular disorders. In 1977, Matthews et al looked at what factor in Type A caused CHD and claimed that it was not the overall stressed character of the person but more the hostility, for example, rudeness towards others, that is the contributory factor towards health problems.