A look at extraversion as a personality trait. What determines whether a person is extraverted or introverted? 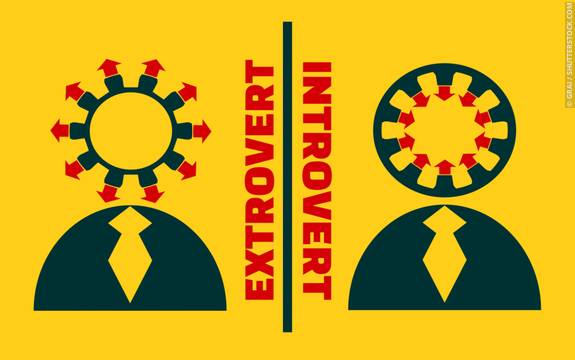 Do you thrive when you are the center of attention in a large group? Are you the first person to introduce yourself at a party? Or, do you turn shy at parties and situations in which you might have to speak to strangers?

If you flourish in social situations, you may have an extraverted personality. For decades, psychologists have used this personality trait to better understand how our personalities differ. People with high levels of extraversion tend to feel more comfortable in social situations. They are usually outgoing, talkative and are happy to be the center of attention even in a group of strangers. Extraverts enjoy meeting new people and are happy to take command when nobody else will lead. They will generally enjoy a wide social network of friends and acquaintances resulting from their outgoing behavior.

Whilst extraversion is associated with outgoing behavior - an external activity - it also helps us to understand a person’s inner world. Psychologists believe that a need for social stimulation drives extraverts' behavior. They find it possible to meet this need by engaging in conversations with strangers, or leading group in challenges at work. Extraverts feel a sense of reward following such social experiences.

Are you an extravert? Take the quiz

Some people are, of course, more extraverted than others, and to different degrees. We can understand extraversion as varying in extent on an introversion-extraversion scale. A person with a lower level of extraversion may be described as an introvert. Introverts feel more comfortable when socialising in small groups, and with people who they are familiar with. They may find demanding social gatherings to be draining, and be reluctant to draw attention to themselves in groups.

As a result, introverts tend to have fewer friends and associates, but form strong relationships with those friends they do have. Instead of seeking stimulation by socialising, they receive it from within, and are content with their own company. Introverts tend to be quieter, more cerebral and more reflective than extraverts.

As people tend to fall somewhere between two extremes of extraversion and introversion, extraversion is measured on a continuum. Many people will exhibit extraverted behavior to different degrees in particular situations. At other times, the same people will behave in an introverted fashion. The term ambivert is used to describe a person who falls in the middle of the extravert-introvert scale.

Extraversion and introversion were popularised by Swiss psychoanalyst Carl Jung (1875-1961) in 1921. In Psychological Types, Jung described how extraverts engage with external stimuli (Jung, 1921). He believed that extraverts direct their energy outwards - towards other people - and gain energy from such encounters. Introverts, meanwhile, focus their energy inwards, towards more solitary, thoughtful activities.

Hans Eysenck, a German-born psychologist who spent much of his life studying personality at the University of London, claimed that extraversion was a key dimension in human personality. Eysenck developed a model of personality, focussing on extraversion and neuroticism traits (Eysenck, 1967). After studying his subjects, Eysenck concluded that people’s personalities could be understood using introversion-extraversion and emotionally stable-neuroticism scales.

Eysenck’s wife, Sybil, was a fellow personality psychologist, and together they extended his original model. They later added the psychoticism trait to create the PEN model of personality. According to this model, extraversion, psychoticism and neuroticism are major personality traits. These broad traits can then be sub-categorised into a series of minor personality traits. Hans and Sybil developed the Eysenck Personality Questionnaire, with which they assessed the traits used in the PEN model (Eysenck & Eysenck, 1976).

Today, extraversion remains an important measure of the way in which our personalities differ from one another. Alongside openness, conscientiousness, agreeableness and neuroticism, extraversion is considered one of the ‘Big Five’ traits. These traits are often used to provide broad measures of individuals’ personalities.

What Causes a Person to be Extraverted?

What factors cause a person to be more extraverted than another? Sometimes, close relatives, raised in the same environment by the same parents, will be extraverted. But at the same time, their brother or sister will be an introvert. Do we become extraverted or introverted depending on the way we are socialised? Or is the extraversion trait inherited from our parents?

According to Eysenck, biological factors play a significant role in determining our personality traits. In a 1956 twin study, he found a stronger correlation between extraversion amongst identical than fraternal twins, suggesting a hereditary influence on this personality trait (Eysenck, 1956). He later claimed that low levels of cortical arousal in extraverts lead them to seek stimulation from their environment, whilst introverts’ increased cortical arousal reduces their need to engage with external stimuli (Eysenck, 1979).

A recent study has provided further support for the idea that biological factors influence extraversion. In a paper published in the journal Social Cognitive and Affective Neuroscience, researchers in Italy, the US and UK studied MRI scans from the Human Connectome Project. They found a series of correlations between participants’ Five Factor personality traits and brain structures. Specifically, the research revealed increased cortical thickness amongst extraverts in the precuneus region of the brain (Riccelli et al, 2017).

Differences in brain structure were found in the precuneus of extraverts, compared to introverts (Riccelli et al, 2017).

Research also suggests that environmental factors could play a role in personality development. Erik Noftle and Phillip Shaver (2006) found that the mother-child relationship can affect extraversion levels. They investigated attachment styles - the type of relationship formed between mother and child during the early stages of childhood development. Noftle and Shaver reported that children who formed a secure attachment with a parent exhibited higher levels of extraversion than those who formed other types of attachment.

Other studies have focussed on child-rearing styles and later interactions between parents and their children, as influences on extraversion levels. Researchers at Osaka University in Japan found that the children of protective parents tended to exhibit lower levels of extraversion, for instance (Nakao et al, 2000).

Parental discipline may also influence the development of a child’s personality. Siegelman (1966) reported that sons who were punished by their parents would exhibit more introverted behavior than those who were less severely disciplined.

Are extraverts happier than introverts? Studies have long supported a link between extraversion and subjective well-being. Extraverts gain pleasure from the attention and stimulation of social interactions with friends, family, colleagues and even strangers. Furthermore, extraverts’ enthusiasm for social activities and their engagement with their environment has been found to lead them to actively seek out more of these enjoyable experiences (Magnus et al, 1993).

However, increased opportunities to socialise appear not to be the only factor in extraverts’ happiness. Even whilst alone, extraverts report being happier than introverts (Diener, 1992).

Links between extraversion and subjective well-being may lead people to feel that their potential to achieve happiness has been predetermined by their personality type. But this is not necessarily true. Researchers at Oxford Brookes University have suggested that extraversion levels simply affect the behavior that we use to find happiness, rather than determining it. Extraverts enjoy social situations and therefore active seek them out, whilst introverts find them uncomfortable and look for solitude as a way of avoiding unwanted social interactions (Hills & Argyle, 2001).

Researchers at Wake Forest University in North Carolina have suggested that extraversion as a personality trait may not, in fact, be the cause of happiness.

Instead, they found in a series of experiments that people were happier in situations which they were required to behave as extraverts. So, an introvert may act extraverted - push herself to be more sociable, for instance - and feel more positive as a result (Fleeson, Malanos & Achille, 2002).