The openness to experience personality trait measures our receptivity to new ideas and experiences. 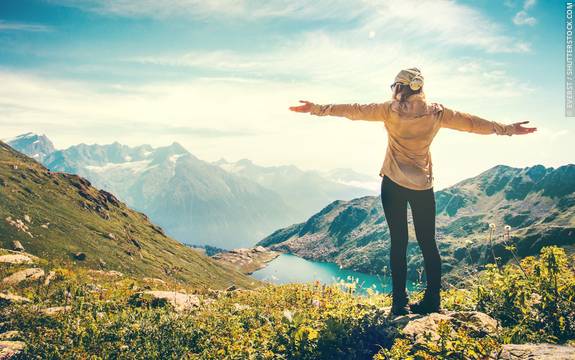 Openness to experience is one of the ‘Big Five’ factors and is used to study and measure individual differences in personality. A person with a high level of openness to experience will often enjoy venturing beyond his or her comfort zone. They seek out new, unconventional and unfamiliar experiences, travelling to new destinations, embracing different cultures and practices.

Higher levels of openness can lead a person to be more open to novel or unconventional ideas and viewpoints. Such people are often more willing to try out new activities that they have not experienced previously.

By contrast, people with low openness to experience will seek refuge in more familiar surroundings. They are more likely to pass up on opportunities to try new experiences, such as travelling to exotic destinations or making a drastic career change. Instead, they gain comfort from the predictability of the environment that they are accustomed to. Adhering to set routines and schedules, they prefer the ‘tried-and-tested’ familiarity of traditions. They may be considered to be closed to experience.

Along with four additional factors - conscientiousness, extraversion, agreeableness and neuroticism - openness to experience is one of the five measures of personality commonly referred to as the ‘Big Five’ factors. Together, these factors can be used to provide a broad assessment of an individual’s personality.

The use of key phrases, such as ‘openness to experience’ to understand personality emerged in line with the lexical hypothesis. This hypothesis posits that, over time, languages will accumulate the vocabulary to describe commonly observed personality traits, thus enabling people to discuss the particular qualities of personality with one another.

Many attempts have been made to produce comprehensive inventories of personality traits using the lexical approach. In 1936, psychologists Gordon Allport and Henry Odbert identified a list of around 4,500 terms in Webster’s New International Dictionary, which could be used to describe personality traits. In the 1940s, Raymond Cattell began work on the Sixteen Personality Factor Questionnaire (16PF), which measured a refined set 16 personality traits.

In recent decades, the ‘Big Five’ has been recognized as a more concise measure of key personality factors. Robert McCrae and Paul Costa’s Five Factor Model, for instance, measures broad factors such as openness to experience, whilst identifying a series of ‘facets’ - secondary personality traits (e.g. adherence to traditions) linked to each of the five factors. McCrae and Costa’s research into the five factors identified the key traits attributable to openness:

"According to adjective-factor results, openness is best characterized by original, imaginative, broad interests, and daring," they reported (McCrae and Costa, 1987).

Each of the ‘Big Five’ factors of personality, including openness, are often measured using questionnaires. Subjects are asked to respond to a series of descriptive statements, self-reporting how accurately the sentences describe their own attitudes.

Whilst questionnaires are commonplace in personality trait assessment, their use is not without drawbacks.

One disadvantage of self-reporting questionnaires is the potential for people to respond with answers that they feel portray themselves in a more positive light. A desire for social desirability can lead to respondents misrepresenting their true attitudes in their answers.

For instance, a person who is asked how open they are to new experiences may respond positively even if they are more closed, as openness is often considered to be a desirable personality trait.

Openness to experience has been found to be associated with higher scores on intelligence tests. Therefore, openness and intellect are sometimes combined as related factors of personality, as in this definition published in the journal Frontiers in Psychology:

“Openness/Intellect reflects imagination, creativity, intellectual curiosity, and appreciation of esthetic experiences. Broadly, Openness/Intellect relates to the ability and interest in attending to and processing complex stimuli.” (Weisberg, DeYoung and Hirsh, 2011).

In particular, openness has been found to be positively correlated with verbal/crystallized types of intelligence (Schretlen et al, 2010). Naturally, people who are open to new experiences place themselves in situations where they are more likely to acquire new knowledge than people who reside in the same environment.

Openness can also affect a person’s self-perception of their own intelligence. McCrae and Costa note that, “Open individuals tend to be seen by themselves as somewhat more intelligent” (McCrae and Costa, 1987).

However, they question whether openness causes increased intelligence levels or high intellect levels lead to more openness to experience:

“Intelligence may in some degree predispose the individual to openness, or openness may help develop intelligence, but the two seem best construed as separate dimensions of individual differences” (McCrae and Costa, 1987).

In common with other ‘Big Five’ factors, openness to experience has been found to be affected by individual differences. Notably, differences in openness have been observed across younger and older age groups, as well as genders.

Your openness to experience will likely vary throughout your lifespan, as revealed by research into responses to the National Health and Nutrition Examination Survey Epidemiologic Followup Study.

Researchers analysed data from the U.S. survey of 10,063 people and found that older respondents reported lower levels of openness (alongside extraversion and neuroticism) than younger participants. The findings of the study suggest that as we grow older, our willingness to embrace new ideas and experiences gradually decreases (Costa et al, 1986).

Differences have also found between openness to experience in men and women. When openness as a personality factor is distinguished from intellect, women have been found to exhibit higher levels of openness than their male counterparts.

However, on a facet level, conflicting correlations - both positive and negative - have been found between gender and the individual facets associated with openness (Weisberg, DeYoung and Hirsh, 2011).

Can openness be found across different cultures, or is it a trait that is limited to the Western cultures in which it was identified?

Measures of openness depend upon the lexical approach of describing personality using a person’s native language. Therefore, the English-based inventories used to evaluate openness cannot be used to identify the trait in non-English speaking cultures.

As a result, psychologists have developed localized questionnaires for different cultures, attempting to find equivalent terms that describe facets of the five factor traits in languages such as French, German and Spanish.

A series of studies investigating the replicability of Big Five factor observations in non-English speaking countries have found traits such as openness to be universally applicable across a diverse range of cultures.

How open to experience are you? Take the quiz
Share:
ShareTweetStumble UponPin It
Citations