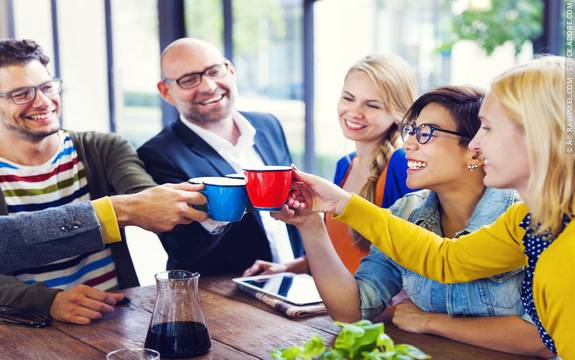 Agreeableness is one of the ‘big five’ personality factors or traits which has for decades been the subject of psychology research. A person who is highly agreeable will exhibit pro-social forms of behavior. They are more sociable, aim to please other people and are willing to help those in need. As a result, agreeable people tend to work well as part of a team. During arguments or times of conflict, they will seek to resolve, rather than prolong, confrontation.

People with low levels of agreeableness scores are less altruistic. They are often less willing to co-operate with others, and are instead motivated to pursue their personal interests, rather than those of their group.

As with other personality traits, agreeableness remains fluid throughout a person’s life. Research has found that we tend to become more agreeable as we grow older (Donnelan et al, 2009).

A tendency towards pro-social behavior can lead an agreeable person to be perceived as warm, sociable and ‘likeable amongst his or her peers’. They are friendly towards other people, tolerant of others and show more patience than those who are less agreeable. A person who is agreeable may be more trusting of others and their intentions.

Agreeable people also exhibit more altruistic behavior. They are generally thoughtful of, and more kind to, peers, are generous towards people in a disadvantaged position and are willing to help those who need it.

Whilst some people thrive during conflicts, people who are agreeable try to avoid or resolve such situations. They will often acts as the mediator or ‘peacemaker’ of a group, attempting to appease two arguing or conflicting parties.

A person with a low level of agreeableness - someone who is disagreeable - displays less pro-social behavior. They tend to be more focused on their person needs, even when these conflict with the interests of others. Their peers may therefore view them as somewhat selfish in their behavior.

Low agreeableness can also result in a person being suspicious and distrusting of the motives of others. They may be more argumentative, and be less willing to engage in conversations with, or socialise with, unfamiliar people.

People with low levels of the agreeableness have been found to exhibit higher levels of ‘dark triad’ traits, a series of characteristics with negative associations, including Machiavellianism, narcissism and psychopathy (Jakobwitz and Egan, 2006).

A significant amount of research has been undertaken into agreeableness owing to it belonging to a group of five ‘super’ personality factors. Psychologists believe that these factors - which also include openness, conscientiousness, extraversion and neuroticism - can account for most of the differences observed in people’s personalities.

Agreeableness is included in numerous theories of personality, including the five factor model proposed by Robert McCrae and Paul Costa, Lewis Goldberg’s ‘Big Five’ factors and the HEXACO model developed by Michael Ashton and Kibeom Lee.

Such models follow a lexical approach to personality, which assumes that common traits can be described using existing terminology such as ‘agreeableness’, and that the observation of a trait necessitates that a language will develop a new term so that it may be discussed.

Agreeableness is typically measured using self-report questionnaires, where a person is asked to review an adjective or statement and then report the degree to which it describes their personality on a Likert scale (e.g. ‘1 - Strongly Disagree’ to ‘5 - Strongly Agree’). Question inventories which include measures for agreeableness include the Revised NEO Personality Inventory (NEO PI-R) and the International Personality Item Pool (Costa and McCrae, 1987).

The use of such questions to assess agreeableness allows a respondent to provide answers which provide a greater insight into their personality than the observation of his or her behavior might. However, questionnaires are also require respondents to be honest when providing answers.

Research has found that respondents often provide answers which they believe will project themselves positively, rather than reflecting their actual personalities. This distortion of responses with a view to more positive self-presentation is known as a social desirability bias.

Should I Be More Agreeable?

Traits of agreeableness are commonly viewed in a positive light, and are considered by many to be socially desirable. Indeed, the ‘likeability’ of an agreeable person and their willingness to cooperate with peers can help them to thrive in social situations.

Yet, the interaction between childhood experiences and agreeableness is unclear.

Moreover, agreeableness is not always advantageous. Whilst it can help a person working in a group, it is less helpful to those engaging in tasks that are confrontational in nature.

For instance, a teacher trying to gain the respect of students in a classroom may need to persuade them to comply with their directions, rather than to compromise with them.