How the 'super traits' of the Five Factor Model explain differences in personality and the way people behave. 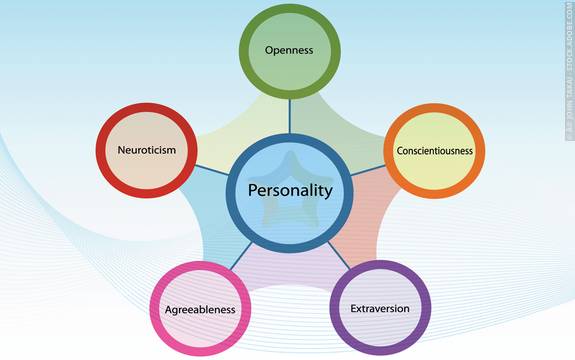 In psychology, five broad dimensions (the ‘Big Five’) are commonly used in the research and study of personality. Since the late 20th Century, these factors have been used to measure, and develop a better understanding of, individual differences in personality.

These five factors include:

The five factors may be easily remembered using the acronym ‘OCEAN’. They are measured on continua, whereby an individual may be highly extraverted, low in extraversion (introverted) or somewhere between these two extremes.

Early research into personality followed trait theory - the idea that a person’s temperament and behavior can be understood in terms of individual traits (e.g. self-confidence, friendliness or melancholy).

Trait theory takes a lexical approach to personality, which assumes that traits can be described using single adjectives or descriptive phrases. If enough people regularly exhibit a form of behavior and no term exists in a given language to describe it, then according to the lexical hypothesis, a term will be created so that the trait may be considered and discussed with others.

In 1936, psychologists Gordon Allport and Henry Odbert extracted approximately 4,500 terms from Webster’s New International Dictionary which described types of behavior or personality traits. Many of these terms could be grouped under superordinate factors, and so later work focussed on the production of more concise trait inventories, which would be more practical the field of personality research.

In the 1940s, Raymond Cattell developed a 16-item inventory of personality traits and created the Sixteen Personality Factor Questionnaire (16PF) instrument to measure these traits.

Robert McCrae and Paul Costa later developed the Five-Factor Model, or FFM, which describes personality in terms of five broad factors. Psychologist Lewis Goldberg referred to these as the ‘Big Five’ factors of personality, and developed the International Personality Item Pool (IPIP) - an inventory of descriptive statements relating to each trait. Within each factor, a set of individual traits relate to more specific aspects of personality.

The five factors may be assessed using a number of measures, including self-report questionnaires.

A subject is asked to read a number of descriptions or adjectives and to rate the accuracy with which they describe their own personality on a Likert scale (e.g. 1 - Strongly Disagree to 2 - Strongly Agree).

Whilst self-report measures provide an insight into a person’s personality that behavioral observation alone cannot provide, they are also vulnerable to manipulation by a subject, who may provide more desirable answers to questions (known as social desirability bias).

Five Factors at a Glance

The openness to experience dimension of personality is characterised by a willingness to try new activities. People with higher levels of openness are amenable to unconventional ideas and beliefs, including those which challenge their existing assumptions.

They enjoy artistic and cultural experiences, visiting art galleries, museums, theatres, listening to music and travelling to new destinations. They are more open to unfamiliar cultures and customs.

People with low levels of openness - those who are closed to experience - are wary of uncertainty and the unknown. They are more suspicious of beliefs and ideas which challenge their status quo.

They feel uncomfortable in unfamiliar situations and prefer familiar environments. Less open individuals value the safety of predictability, and like to adhere to well-known traditions and routines.

Openness to experience is often associated with intelligence when measuring personality factors.

Individuals who score highly on verbal/crystallized intelligence measures have been found to also report being more open to experience (Schretlen et al, 2010).

One explanation is that people who are more open place themselves in environments where they are more likely to acquire new knowledge (e.g. during a visit to a museum) than those who remain in the same, familiar surroundings.

Learn more about Openness to Experience

Take the Openness to Experience Quiz

People who are conscientious are more aware of their actions and the consequences of their behavior than people who are unconscientious. They feel a sense of responsibility towards other and are generally careful to carry out the duties assigned to them.

Conscientious individuals like to keep a tidy environment and are well-organized. They are keen to maintain good timekeeping.

People with high conscientious levels also exhibit more goal-oriented behavior. They set ambitious goals and are motivated to achieve them. Undeterred by hard work, they are keen to driven to succeed in every aspect of their lives, including academic achievements and in furthering their careers.

Low levels of conscientiousness are reflected in less motivated behavior. Unconscientious individuals are less concerned by tidiness and punctuality. This may result in them arriving late to appointments and meetings, and being more relaxed in setting life goals.

Unconscientious people tend to engage in more impulsive behavior. They will act on a last-minute whim rather than considering the consequences of their choices.

Research suggests that both environmental factors and heritability may influence in conscientiousness.

One survey found that participants whose parents had displayed affectionate behavior towards them as children were likely to report higher levels of conscientiousness in adulthood (McCrae and Costa, 1988).

However, the findings of a subsequent twin study suggest that conscientiousness may be in part influenced by the genes inherited from parents (Jang et al, 1996).

Extraversion is characterised by outgoing, socially confident behavior. Extraverts are sociable, talkative and often forward in social situations. They enjoy being the center of a group and will often seek the attention of others.

Extraverts enjoy meeting new people and are happy to introduce themselves to strangers, thriving in company of others.

This personality trait is measured on a introversion-extraversion continuum. Individuals who fit in the middle of the two traits are described as ambiverts.

Introverts - people with low levels of extraversion, display contrasting behavior. They are quieter and often feel shy around other people. They may feel intimidated being in large groups such as parties, and will often try to avoid demanding social gatherings.

Introverts enjoy being a part of smaller social groups, preferably with familiar people.

Such behavior results in introverts tending to enjoy smaller social networks, but instead they maintain a close group of trusted friends.

German-born psychologist Hans Eysenck felt that extraversion, along with neuroticism, was a key personality factor, and included it in the PEN model of personality (Eysenck and Eysenck, 1976).

As a result, they seek external stimulation in the form of socially engaging behavior. Cortical arousal is higher in introverts, according to Eysenck, resulting in them not requiring external stimuli to the same extent as extraverts (Eysenck, 1979).

Swiss psychoanalyst Carl Jung explained extraversion in terms of psychic energy, which each individual directs differently. Jung wrote that extraverts direct such energy outwards, towards other people, whilst introverts concentrate their psychic energy on solitary activities such as thoughtful contemplation (Jung, 1921).

Individuals who score highly on agreeableness measures are friendly and co-operative. Often considered more likeable by their peers and colleagues, agreeable people are trusting of others and are more altruistic, willing to help others during times of need.

Their ability to work with others means that they often work well as members of a team.

Agreeable people dislike being involved in arguments, conflict with others and other forms of confrontation. They seek to pacify and appease others, acting as the mediating ‘peace-maker’ of their group.

Individuals who are disagreeable score lower on this dimension of personality. They are less concerned with pleasing other people and making friends. Disagreeable individuals are more suspicious of other people’s intentions and are less charitable.

Instead, they are motivated to act in accordance with their self-interest, showing less regard for the needs of others. As a result, they are perceived by others as being more selfish than agreeable personalities.

Whilst disagreeable individuals find it easier to promote their own interests, those who are more agreeable tend to enjoy better relationships with others. From an early age, this can be beneficial: Jensen-Campbell et al (2002) found that children with higher levels of agreeableness were less likely to be subjected to bullying at school.

As with some of the other ‘Big Five’ personality factors, our agreeableness levels are fluid throughout our lives, tending to increase as we grow older (Donnelan et al, 2008).

This personality dimension is measured on a continuum ranging from emotional stability to emotional instability, or neuroticism. People with high neuroticism scores are often persistent worriers. They are more fearful and often feel anxious, over-thinking their problems and exaggerating their significance. Rather than seeing the positive in a situation, they may dwell on its negative aspects.

Neuroticism can result in a person coping less successfully with common stressors in their day-to-day lives. Instead, they will often become frustrated with others and may feel angry if events do not occur as they wish.

People with low neuroticism scores are less preoccupied by these negative concerns. They are able to remain more calm in response to stressful situations, and view problems in proportion to their importance. As a result, they tend to worry about such problems to a lesser extent.

A person’s neuroticism can have repercussions in terms of their relationship with others. A study found that people in relationships were less happy than other couples if their partner scored highly on the personality trait (Headey et al, 2010).

One explanation for neuroticism was provided by psychologist Jeffrey Alan Gray’s biopsychological theory.