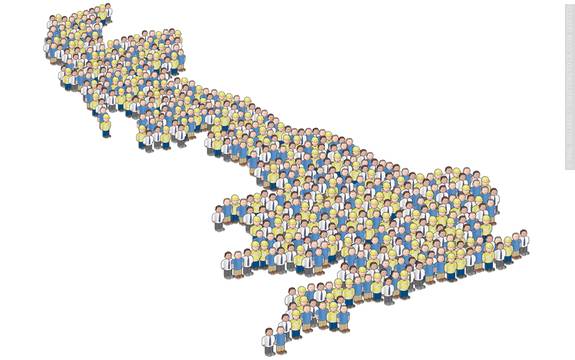 Differences in personality traits have long been associated with the residents of regions across individual countries. In the U.S., a series of studies identified personality differences between individual states and across wider geographical regions, such as the Southern states. A study published in the journal PLoS One has identified similar personalities differences amongst the residents of Great Britain (Rentfrow et al, 2015).

The study was led by Dr. Peter Jason Rentfrow, an Assistant Professor in Social and Developmental Psychology at the University of Cambridge. Working in collaboration with the BBC, it gathered data using an online survey promoted as the ‘Big Personality Test’.

Between November, 2009 and April, 2011, 386,375 participants completed the survey, which collected demographic information such as gender, age, ethnicity, health, education and location of residence. 64% of respondents were female, with a mean age of 35.98 years. 86% of participants lived in England, 9% in Scotland and 5% in Wales.

Using this data, the study’s authors were able to identify personality differences across precise areas known as Local Authority Districts (LADs). These districts include boroughs in London, unitary authorities in Wales and Scottish council areas.

Additionally, the survey scored individuals on key personality traits. Using the ‘Big Five Inventory’, participants were asked to rate on a Likert-style scale (e.g. ranging from ‘strongly disagree’ to ‘strongly agree’) the extent to which a series of statements described their personalities.

Data gathered using the inventory was then analysed to assess respondents in terms of five key personality dimensions, which are commonly studied by psychologists. These include openness to experience, conscientiousness, extraversion, agreeableness and neuroticism.

The study looked at variations in extraversion, a trait associated with social confidence and talkative behavior. It found that higher extraversion scores tend to be held by residents of London, Yorkshire and Manchester, as well as regions in the South of England and Scotland.

The report’s authors note that extraversion levels correlate with a number of socio-economic factors, which vary significantly across the Local Authority Districts studies.

They observe that, “LAD-level Extraversion was associated with high levels of education, income, and high-status occupations, social diversity, and long life expectancies for men and women.”

Individuals who are highly agreeable tend to be friendly, generous and kind towards others. They are perceived to be ‘warm’ by peers in social situations. Low agreeableness reflects unfriendly, often more self-centered behavior and a suspicion towards strangers.

Conscientiousness is summarized by the researchers as a tendency to be “self-disciplined, cautious, and compliant”, whilst lower levels of the trait are characterised by behavior which is “disorderly, rebellious, and indifferent”.

The study found higher levels of conscientiousness amongst residents of Southern England, districts in the Midlands and the Highlands in Scotland. Residents of Wales, London and some areas in the North of England reported lower levels of the trait.

Rentfrow found that neuroticism levels were higher amongst residents of Wales and dispersed regions across the Midlands. Lower levels of neuroticism were observed in respondents living in most of the South of England and Scotland.

Openness (sometimes referred to as ‘openness to experience’) reflects a person’s willingness to engage in new experiences. Individuals who are open tend to enjoy travelling to new places, experiencing the arts, different cultures and new ideas. People who prefer to remain within their comfort zone, adhering to a trustworthy routine and traditions, are considered to possess lower levels this personality trait.

Some of the lowest levels of openness were found amongst respondents living in the East of England and the East Midlands.

Whilst the research reveals significant regional variations in terms of the Big Five personality dimensions, the reasons for such differences is less clear.

Rentfrow and his colleagues identified three factors which have been the subject of previous studies into personality, and which may help to explain regional differences in these personality dimensions.

“Consider, for instance, living in a place where there is a large proportion of anxious and irritable residents,” they write. “The current findings raise the question of whether living in such a place would increase the level of negative affect of the people who live in that area and lead to a high level of Neuroticism for the area. Add to that the poor physical health that is common in the high Neuroticism regions, and residents would have good reasons to be anxious and depressed.”.

A second factor in personality variations is the ecological differences across various regions of Great Britain. Climate and health trends can affect the attitudes of residents living in a particular area. Rentfrow notes that in the Southwest of England - one of the warmest regions studied - neuroticism amongst residents was lower. A similar observation may be made in studies of U.S. personality differences, which have also found neuroticism levels to be lower across the warmer West Coast of the country.

Finally, migration may contribute towards the clustered regions of individuals with similar levels of a personality trait. The study’s authors suggest that often, people will migrate to a location which better serves their psychological requirements. In support of this hypothesis, a 1998 study published in the journal European Psychologist found that citizens who were motivated by a need to achieve were more likely to migrate from a region when the opportunities to fulfill this need were not afforded to them locally (Boneva et al, 1998). Therefore, highly motivated individuals may gather in a region which provides greater financial and career development opportunities.