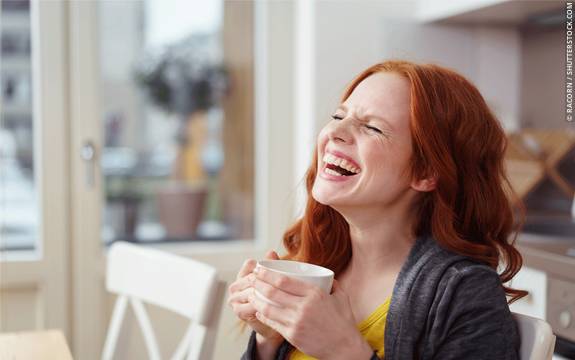 The human brain is able to automatically differentiate between authentic and artificial emotional outbursts, according to a recent laughter study.

We each make many distinct types of laughter, from brief outbursts in response to a joke, to more prolonged, often uncontrollable, cachinnating. Some people laugh to disguise their nervousness, whilst others will make ‘forced’ laughter to appear more amiable to peers in social situations.

Most people can distinguish between a person faking their laughter and someone who is genuinely amused. Now, researchers believe that the brain reacts differently when hearing these two forms of outburst.

“There is nothing in the world so irresistibly contagious as laughter”

Dr. Carolyn McGettigan, a researcher at Royal Holloway, University of London, led the study in which participants were asked to listen to laughter whilst their neural activity was monitored.

The researchers recorded female laughter under 3 conditions. In the first condition, the women were asked to laugh on demand - to produce “emitted”, artificial laughter, but were asked to sound “natural and positive” as they did so. Secondly, they watched entertaining YouTube video clips and their authentic, “evoked” laughter was recorded. Finally, they were asked to produced a sound denoting disgust (for instance, at an unattractive smell).

In a pilot test, McGettigan tested the accuracy with which people were able to distinguish between genuine and falsified laughter. Whilst success was high, with successful laughter recognition in 82.5% of cases, she found wide variations, ranging from 69% to 96%, amongst individuals’ abilities to verify the authenticity of the laughter (McGettigan et al, 2015).

In the main study, a group of 21 adults, consisting of 13 females and with an average age of 23 years and 11 months, were then asked to take part in an experiment. They were instructed to listen to different sound recordings with their eyes closed. Whilst they listened, the participants’ neural activity was observed using a functional MRI (fMRI) scanner.

McGettigan found that the regions of the brain activated in response to hearing the laughter differed depending on the authenticity of the sounds.

In participants listening to the authentic, ‘evoked’ laughter, activation was higher in the bilateral superior temporal gyrus and Heschl’s gyrus.

However, activation differed in response to forced laughter. When participants heard recordings of such laughter, activation increased in the anterior medial prefrontal cortex.

The research was able to identify the role played by specific regions of the brain when processing and recognizing the “emotional authenticity” of human social interactions. The importance of laughter in emotional communication appears to extend beyond humans, with previous studies observing that chimpanzees also use laughter in social situations.

The study’s authors identified the importance of contagious laughter amongst individuals in social groups. They noted that, "...the laughter elicited by others' laughter is associated with attempts to sustain and prolong social play, and play lasts longer when laughter is echoed.".

Brain Explorer
Discover what each part of your brain does and how it functions with the new interactive Brain Explorer.
How Drugs Affect Us: Cells
How do drugs that affect our mood (for example, Prozac for depression) and the way we behave work?
Serotonin
Seratonin's role in anxiety and depression.