The Name-Letter Effect: Why People Prefer Partners with Similar Names

Exploration of the name-letter effect - people's attraction to potential partners with similar names to them. 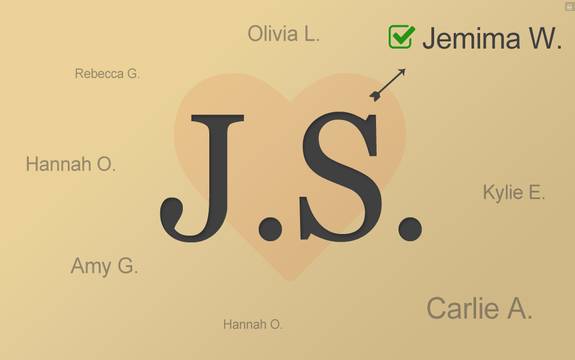 The name-letter effect explains why people show a preference for partners with the same initials as them.

Does the name given to you at birth influence who you will choose to partner with as an adult? According to the name-letter effect, people are more likely to be attracted to someone who shares their first initials. A man named Robert, for example, may be more attracted to women by the name of Rachel or Roberta, whilst a woman named Amy might be more likely to date an Andrew than a James.

This intriguing effect can sway many of the most important choices we make in our lives without us even realising.

The name-letter effect was first identified in 1985 by the Belgian psychologist Jozef Nuttin (1933-2014), who found that people showed a preference for letters which occurred in their first or last names, such as their initials.1 Further research, published in 1987, tested the extent to which this phenomenon crossed national borders, and found the name-letter effect to affect speakers of 12 different European languages.2

How do preferences for particular letter influence my life choices?

Nuttin’s research demonstrated participants’ positive view of letters in their own names, but how does this affect our decision making in real life situations?

A 2004 study by John Jones et al looked at marital records in search of the role played by name-letter preference in people’s partner selection. The study analysed data from two databases of marriages in U.S. states and found a correlation between spouses’ surnames, supporting the idea that we find partners with similar names to our own. Women with the surname Smith, for instance, tended to engage in relationships with, and eventually marry, men who shared the same last name (Jones et al, 2004).3

Why does the name-letter effect affect us?

Numerous theories have been proposed for people’s preference for people with similar names.

A study of four and five year olds in the U.S. and Australia found that participants were more familiar with their own name initial than with other letters in the alphabet. An obvious explanation for this would be children’s focus on learning to write their own name before attempting other words (Treiman and Broderick, 1998).4 Therefore, from an early age, the success of writing one’s own name could create a lasting positive impression of a person’s own initials.

This understanding of the name-letter effect does, however, seem to contradict other research which studied letter preference among speakers of multiple languages. The study looked at bilingual Bulgarians, who had learnt to write using the Cyrillic alphabet and had only later become fluent in using the Roman alphabet. Even without the association of learning to write their own names using Roman letters, the participants still preferred their own initials in the second alphabet that they had learnt (Hoorens and Todorova, 1988).5

Other researchers prefer to understand the name-letter effect as a form of “implicit egotism” - a result of people’s tendency to view attributes similar to their own as being more positive than others (Pelham, Carvallo and Jones, 2005).6 This favorable self appraisal also takes other forms - research published in Political Psychology identified separate studies which found that, in elections, people are more likely to vote for candidates who share their own characteristics. To the contrary of the adage “familiarity breeds contempt”, familiarity with a trait, or an ability to relate to something, appears to nurture favor (Caprara, Vecchione, Barbaranelli and Fraley, 2007).7

The influence of the name-letter effect has been seen to affect decisions beyond people’s choice of mate - it can help to determine where we choose to live, too. A study of the link between personal names and the names of the places they opted to live found that we tend to prefer places whose names are similar to us. Researchers found that a disproportionately high number of women named Virginia chose to live in Virginia Beach, for example. A correlation was even found between the first letters of people’s last names and the name of the state in which they resided, demonstrating the extensive influence of the name-letter effect (Pelham, Mirenberg and Jones, 2002).8

Our liking for names similar to our own is more than just a statistical anomaly - it has implications beyond the field of psychology. A study of the shares that students chose to invest the funds of their university in found a tendency to invest in companies whose name shared the same first letter as their own (Knewtson and Sias, 2010).9

In business, the name-letter effect forms the basis of name-letter branding, a phenomenon which leads us to prefer the products of brand names which are similar to our own (Hodson and Olson, 2005).10

Whilst similar effects can be found whilst observing many of the choices that we make, often they have no practical applications. An exception to this was, however, noted in the case of charitable giving.

Bekkers (2009) conducted an experiment involving Utrecht university graduates and found that people were more likely to make donations when approached by someone with a similar name to make a contribution, or when their first names resembled the name of the university. This lead the author of the study to suggest that the name-letter effect be embraced by telephone-based charity workers in an effort to increase donations (Bekkers, 2009).11

Our preference for the familiar is not without its downsides, however. The safety that we associate with what we are accustomed to, which might lead to the name-letter effect, can be detrimental to a person’s success.

When students are awarded letter-based grades, with ‘A’ as a high grade and ‘C’ as a lower score, Nelson and Simmons (2007) found that students whose names began with ‘C’ or ‘D’ underperformed whilst students who shared the initials of better grades scored higher grade point averages (GPAs). An ease with grades of letters that students were most familiar with seemed to work against their target of better grades.12

Emotional Attraction
What causes emotional attraction? Are physical attributes the primary factors that determine attraction or is similarity more important?
What Factors Influence Attraction?
Factors affecting attraction, and the Halo Effect.
Love and Emotion: How Love Happens
A look at the types of love in relationships between partners, parents and family members, and how gender can affect the like or love we feel for best friends and partners.