How light from gadgets' screens affects our sleep-wake cycles. 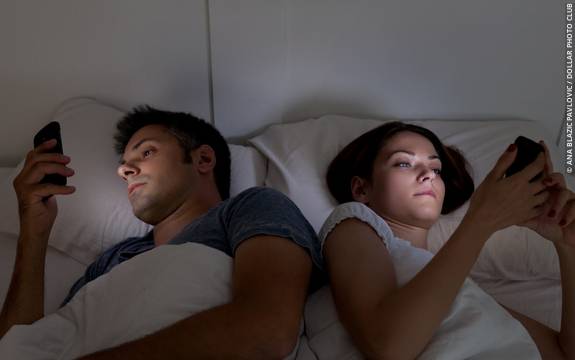 Is your phone keeping you awake at night? Recent research suggests that our increasing smartphone usage is making getting a good night’s sleep more difficult. The reason isn’t so much that phone-related activities stimulate our brains and keep us alert, as the type of light emitted by most modern phones and light’s influence over our sleep patterns.

As we spend more time in front of screens - phones, tablets, laptops and TVs - we are exposed to higher levels of blue light, which has a short wavelength of around 475 nanometers compared to light of warmer colors, such as red light. This blue light is increasingly present in artificial lighting such as the LED screens embedded in today’s gadgets.

But how does blue light affect my sleep?

Psychologists have long known that our biological rhythms, such as the sleep-wake cycle, keep time using exogenous signals. These external signs in our environment include daylight (and its absence at night) and temperature, which increases during the day and decreases at night, enabling our bodies keep daily, circadian cycles to keep to their schedules. These exogenous signals enable our bodies to synchronise with the outside world and to adapt to it when changes occur, as many animals hibernate for cold winter months.

The human body absorbs information from its environment by a number of means. Let us consider light - although we process visual information using the eyes, it is the suprachiasmatic nuclei (SCN), situated just above the optic chiasm in the brain, that recognises light/darkness signals. The SCN then relays this information to the pineal gland which controls the release of the “sleep hormone” melatonin, and when we feel tired, we in turn take action to go to sleep.

Natural light has been found to play an important role in regulating biological rhythms. Without light, our bodies would run freely and adopt a sleep-wake cycle of more than a day - approximately 24 ¼ hours, instead of the 24 hour cycle that we live by (Holzman, 2010).1 Artificial light, however, is another story. When we use a smartphone just before bedtime, we realise consciously that it is time to sleep. Unfortunately, our bodies absorb the blue light emitted by screens and this can confuse the daily sleep-wake cycle which we are used to, leading us to feel wide awake when we should be drifting off to sleep.

Should I avoid my phone at night?

A number of ideas have been put forward to counteract the effect of gadgets’ blue light on our sleep.

Avoiding the use of gadgets close to bedtime has been proposed as a way of reducing our exposure to blue light, with some suggesting a period of upto 3 hours’ gadget-free time before sleep in order to allow melatonin to take its effect on the sleep cycle naturally.2

In this connected world, avoiding phones can be impractical and the temptation to check emails and social media accounts can overcome the best of intentions.

A study published in the Journal of Adolescent Health noted that adolescents in particular tend to use screens in an evening, and experimented with the use of special glasses which reduced blue light before bedtime. The glasses were found to help counteract the effect that blue light would normally have on melatonin release (Lely et al, 2014).3

Apple’s iOS 9.3 update for iPhones and iPads includes a feature called “Night Shift”, which adjusts the tint of colors on screens at night to reduce users’ exposure to blue light. Instead of colors such as pure white, users can alter their screens to display warmer hues with the intention of minimising disruption to the sleep-wake cycle.

Whilst the blue light from phone screens can affect sleep patterns, there are circumstances in which its influence can be turned into an advantage.

In fact, blue light might even help us to be more productive.

An experiment which assessed the effect of different types of office lighting on workers’ moods. For 4 weeks, normal light was used to illuminate the workspace, whilst for another 4 weeks participants worked in blue light-enhanced conditions, before being asked to report on various aspects of their mood. The study found that blue light had a positive effect on workers’ alertness and mood during the day, whilst they were able to sleep at night (Viola et al, 2007).4

Riding Waves: How Biological Rhythms Rule Your Life
How biological rhythms govern our bodies and what happens when they are disrupted.
Polyphasic Sleep Patterns
A look at polyphasic sleep patterns - naps throughout the day - and their impact on performance.
Sleeping Disorders
Common disorders associated with sleep.

A look at polyphasic sleep patterns - naps throughout the day - and their...