Before We Learn To Speak

How body language is an innate form of communication. 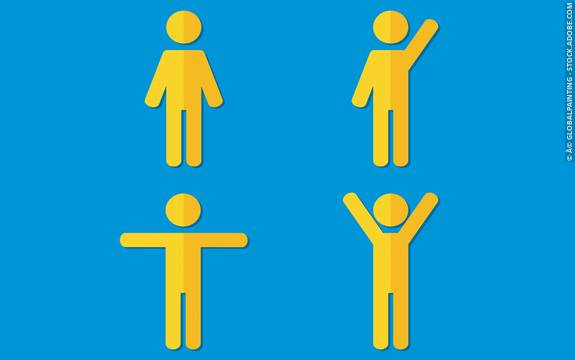 If animals can read body language so easily and readily - why can't we recognize it when we see it? The truth is - we can and do - just not consciously. In fact, scientists believe that humans do use body language consciously, until we learn to speak. Numerous studies that filmed interactions between pre-verbal children - both with each other and with adults - show that the toddlers and infants clearly understand each other without words. In The Secret Language of Your Child, Dr. David Lewis reported what he found when he filmed and studied the interactions between children in a toddler playgroup. The children ranged in age from 12 months to 2 years. None were verbal yet. The cameras caught what the mothers missed - the conversations going on right under their noses.

In one sequence, a shy little girl played with a popular toy by herself. A boy approached her and held his hand out, palm up and fingers wiggling. The girl picked up the toy and turned away from the boy. The boy walked around to face her again and smiled at her with both upper and lower teeth bared in a 'fierce' smile. The girl shook her head no, clutching the toy more tightly. This time, the boy raised his hand to shoulder height and pumped it once or twice in the air in a 'beating' motion. At the same time, he leaned in and put a hand on the toy, never breaking eye contact. The girl looked over her shoulder toward her mother and lifted one hand, opening and closing her fingers. Surprisingly, the boy released the toy with a scowl and walked away.

Not a word was exchanged, and the entire interaction took less than three minutes - yet a whole conversation took place that went sort of like this:

Lewis found that this secret language shared by toddlers and infants seems to disappear around the time that they acquire speech. He theorized that once children have words to express their needs and desires, they no longer need to use gestures exclusively to communicate. Because they no longer need their language, they forget it - but it isn't entirely forgotten. Instead it goes underground, where its vestiges stick around to sound little dissonances when someone's body language doesn't match the words that we're hearing. Lewis found the remains of the secret language of children in the unconscious clenching of a fist when an adult is nervous or angry, in the baring of teeth in fake smiles and in the miniscule greetings that most of us aren't even aware that we're exchanging.

Learning to Be a Better Communicator
Share:
ShareTweetStumble UponPin It
Most Read