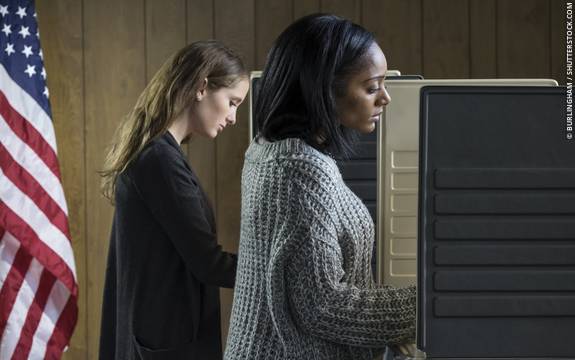 You may hear of a person making a ‘cold, calculating’ decision or a spare-of-the-moment, ‘hot-headed’ choice enacted ‘in the heat of the moment’. For years, such expressions have perpetuated an association in the English language between temperature, mood and impulsive decision making. A new study has found that changes in the weather may directly influence one of the most significant choices people are asked to make: voters’ decisions at the ballot box in U.S. presidential elections.

Jasper Van Assche and Alain Van Hiel at Ghent University in Belgium devised the study, which was published in the journal Frontiers in Psychology.

The researchers looked at state-level voting data from U.S. elections held between 1960 and 2016.

They then compared these election results to historic weather data, provided by National Centers for Environmental Information. For each state, they looked at temperatures taken around election days, taken from weather stations close to the center of each U.S. state.

Firstly, the likelihood of an eligible voter casting a vote - known as voter turnout - was found to be correlated with temperature on polling day. As outdoor temperatures increased, the percentage of the electorate casting a vote also rose. The researchers found that for every 1°C (1.8°F) increase in temperature in a state, voter turnout was boosted by 0.14% (Van Assche et al, 2017).

Whilst high voter turnout in such elections may benefit the democratic legitimacy of the outcome, if the additional votes were distributed evenly between candidates, this may not, alone, affect the outcome of the polls.

The report’s authors did note a second effect of temperature on voting behavior, which holds the potential to sway the outcome of tight electoral races. They found that warmer weather motivated many voters to cast their vote in favor of “non-system candidates” - those advocating change, rather than those proposing a continuation of the status quo.

Crucially however, this effect was also found to benefit those candidates taking the opposite position. Ultimately, the effect of an increased vote share benefits incumbent candidates more than those opposing them.

But why would a person’s voting preference be influenced by a factor as seemingly unrelated as the weather?

Van Assche and his colleagues note previous research which supports the notion that temperature can affect the choices made by individuals.

One such theory was developed by Dr. Dolf Zillmann, who spent many decades researching the effect of media consumption on attitudes and behavior. Zillman proposed an excitation transfer theory, which describes the way in which the arousal of a particular emotion by one stimulus can affect a person’s attitudes towards a separate, seemingly unrelated issue (Zillmann, 2003). With regards to weather, a stimulus such as a warmer temperature may induce a change in attitudes which in turn leads a person to favor a specific election candidate and his or her policies.

Further research has also found that favorable weather can lead voters to develop a sense of satisfaction with the status quo, resulting in a more positive evaluation of the incumbent candidate or government (Mutz and Kampfer, 2011).

Whilst the change in voting behavior caused by changes in temperature may be miniscule, the effect of weather on decision-making may be sufficient to sway elections where two candidates are neck-and-neck in the polls.

Furthermore, the methods used by votings systems to decide a winning candidate can amplify the effect of small vote share increases on the final result of a poll.

For example, in the 1960 U.S. presidential election, Democratic candidate John F. Kennedy stood against Richard Nixon and ultimately beat his Republican rival to the presidency. However, by overturning relatively small majorities in key states, that result could have been reversed. In states such as Hawaii, JFK won by just 0.06% - a sufficiently small majority for temperature to have potentially influenced the final result. In other states, too - Illinois (0.18%) and Missouri (0.52%) - a reversal of small majorities could have swung the presidential election in the opposite direction.

Based on their findings, the study’s authors suggest that Al Gore could potentially have beaten George W. Bush in 2000 presidential election had there been just a 1°C temperature increase in the state of Florida on polling day.

Van Assche’s research builds on a conflicting body of past research into the effect of temperature on decision making.

Previous studies have found that a rise in temperature can increase individuals’ antisocial behavior.

However, Van Assche notes that further research has found evidence to the contrary.

Social Influence
Why do people to conform in groups? A look at how social influence affects opinions and behavior.
Environmental Psychology
What is Environmental Psychology? Find out with this introduction of the approach, overviews of behavior settings, attention restoration theory and defensible space theory.
Minority Influence
Minority influence enables individuals to change the opinions of others. We look at how it changes opinions and the factors that affect minority influence.