The Door-in-the-Face Technique as a Compliance Strategy

How the door-in-the-face technique is used to persuade people to comply with requests. 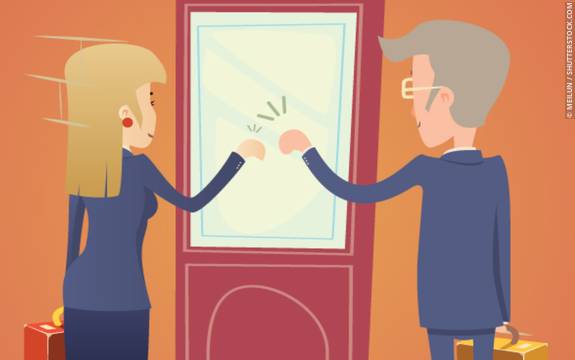 The door-in-the-face technique is a type of sequential request strategy. It is often used to increase compliance rates of a particular request. In contrast to the foot-in-the-door technique, which prefaces a request with a smaller request that the respondent is more likely to agree with, door-in-the-face requests involve asking a more demanding question, followed by the actual request.

The first request is an unrealistic demand, which a reasonable person would be likely to refuse. When the second, intended request is made, it appears the respondent to be reasonable in comparison to the first demand. In theory, a person is more likely to agree to it as a result.

The door-in-the-face technique can be observed in many situations - you may even have used it without realising.

In flea markets, for example, where prices are often negotiable, a man might ask an antique seller the price of a clock.

Both parties realise that the price is unreasonable - the clock cannot be worth more than $50, a tenth of the asking price. The man politely declines the seller and turns to walk away - shutting a metaphorical ‘door in the face’ of the retailer.

Then, the seller calls after the man.

The man thinks that this second price is more reasonable, and purchases the clock. He thinks that the seller reducing the price has resulting in him winning a good deal. Yet, he has paid twice the price of $50 he originally estimated the clock to be worth. The seller is the person who has benefitted the most from the sale, using the door-in-the-face technique.

In another situation, a mother might ask her son, who is playing a game, to clean the living room, dining room and his bedroom whilst she prepares dinner. The boy might resist, claiming that there is too much to clean in such a short amount of time. The mother replies, “Very well, but can’t you at least clean your bedroom?”.

By comparison with the first request, the second seems reasonable to the boy, and he would agree. By using this persuasive technique, the mother has convinced her son to clean his bedroom rather than play games.

The door-in-the-face technique was tested in a 1975 study conducted by Robert Cialdini. A professor at Arizona State University, Caldini has led decades of research into persuasion. He is best known for his 1984 book, Influence: The Psychology of Persuasion.

Cialdini asked a group of participants a large initial request: whether they would agree to be mentors for prisoners for two years. He then asked this of another group, then followed up the question with a request for them to escort children around a zoo. The participants tended to agreed to this second, smaller request. Even though it also required time and effort, it was more reasonable than the initial two-year commitment request (Cialdini et al, 1975).

But why does this method of persuasion tend to produce increased compliance?

A number of explanations have been suggested for the efficacy of the door-in-the-face technique.

One explanation is that the refusal of an initial request, even if it is unreasonable, leads respondents to experience a sense of guilt. O’Keefe and Figgé (1999) noted that guilt reduction can motivate compliance with an ultimate demand. The belief that agreeing to a second request will help to reduce our sense of guilt motivates us to comply.

Robert Cialdini also suggested that people interpret the lowering in demand between the first and second requests as a sign of compromise on the part of the person asking the favor. As they believe that this reduction has been made in order to help them out, they feel obliged to follow the norm of reciprocity - a social norm whereby favors are returned. To repay the goodwill, people subjected to the door-in-the-face technique feel the need to compromise themselves by agreeing to the second request.

Another explanation of the compliance rates gained from this  technique regards more self-centered motives.

We generally want our friends, family and peers to maintain a positive impression of us, whilst many celebrities pursue that age-old, Machiavellian goal of being loved by the masses, making high-profile charitable gestures and giving interviews to improve their public image. This desire is often referred to as a need for positive self-presentation, and may explain why we agree to a second reasonable request but not the first. We often feel reluctant to refuse people’s requests, for fear of appearing selfish or unkind, and our refusal of the first question in a door-in-the face sequence leads us feel that the person making the request will see us in a negative light. The second question, in the mind of the subject, provides an opportunity to prove that we are not as uncharitable as the first question led us to appear, and so we agree to it (Pendleton and Batson, 1979).

Factors relating to the structuring of a door-in-the-face request can affect compliance rates. These factors include the length of delay between the first and the second questions.

In 1999, an experiment was conducted at Santa Clara University to test the technique on two groups of participants. One group was asked the second question immediately after the first, whilst a second group was given time between the questions. The researchers found that a delay increased compliance with the second request (Chartrand et al, 1999).

One explanation for the effect of a delay is that it gives recipients time to consider their response to the first request. During this time, they may realize that their own self-presentation has been tarnished by their refusal to comply. The absence of a delay does not give a person time to realise how they may have appeared to the person making the request.

At the University of Nevada, Murray Millar (2000) measured compliance rates when the relationship between the person making the request and the responder differed. Millar found that when a familiar person made the request, they would be more likely to comply with a door-in-the-face question than they would if the person asking the favor was not known to them. As we tend to care more about what friends and family (members of our in-group) think about us than how strangers (out-group observers) view us, this finding supports the role of self-presentation in our decision making (Millar, 2000).

Social Influence
Why do people to conform in groups? A look at how social influence affects opinions and behavior.
Norm of Reciprocity and Persuasion
The norm of reciprocity leads us to reward helpful behavior. But how is this social norm is used to influence our actions and purchasing decisions?
Foot-in-the-Door as a Persuasive Technique
How the 'foot-in-the-door' technique is used as a compliance strategy.