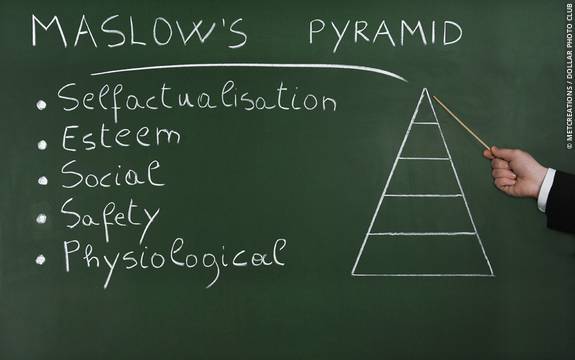 What motivates our behavior?

Abraham Maslow (1908-1970) tried to further previous explanations of behaviour, and looked specifically at what motivates humans. Many theories such as those of Freud, agree that we are motivated by primitive desires such as sex, and the need to feed and drink, and that our behaviour prioritises fulfilling these needs for survival and reproduction. Maslow, however, took a new approach. Prior to Maslow's Hierarchy of Needs, which we'll look at in a moment, key psychologists such as Freud gave highly reductionist views, accounting for our behaviour in terms of primarily sexual desires. Maslow also pointed out that many previous explanations were based on looking at ill people, and that focusing on abnormality isn't necessarily a good start for theories to explain the behaviour of the healthy.

Maslow recognised the complexity of behaviour, and in his books (see related books) proposed a new approach that explains our actions as motivated firstly by the need to fulfil a series of desires or needs as seen in this pyramid diagram:

The pyramid structure of Maslow's needs represents the way in which we strive for basic desires starting at the base of the formation, and once each of these is fulfilled, we work our way up to the ideal of self-actualisation.

The first need we are motivated for is that for survival, in much the same way that non-human animals are. Therefore, until this need for food, drink, warmth and other essential requisites is fulfilled, our behaviour will be influenced to find them.

A Need for Safety

Another primitive need, also important for survival, is for safety and security in our environment. Most animals, human and non-human, tend to seek this, whether it takes the form of creating a nest or building a home. Once this need is fulfilled, we are motivated to strive toward a third goal...

Love is another need once safety and security are available to us, and our behaviour might be orientated towards meeting people and finding a partner. Note that the need for 'love' is separate from the sexual desires that form the basis of Freud's ideas.

Everybody likes to be liked, and this is reflected in Maslow's fourth level of desires. He divided such needs into the need for higher esteem and lower esteem:

Once these needs are fulfilled, we reach Maslow's ideal state - self-actualisation. This is a state in which we can reach our full potential, as Maslow's subjects (including Albert Einstein) managed.

So how do we define a self-actualiser? Maslow specified a series of qualities in self actualiser who is able to reach their potential; they will tend to focus on the higher needs in the hierarchy of needs (for example, ego-fulfilment and being loved by friends) as opposed to those more basic 'animal instinct' needs for food and security.

In his research, Maslow used people such as Albert Einstein as examples of self-actualisers, and it has even been suggested that the psychologist himself was one. In general, we can consider many successful characters as self-actualisers realising their potential. But what sets them apart?

People meeting Maslow's criteria will tend to be unafraid to accentuate their own personality, with idiosyncrasies, showing only limited regard for what others think of them (this is of course not to be regarded necessarily as a negative aspect).

Maslow's ideas on self-actualisation have proven highly popular and useful particularly in the advertising industry. Advertisers have learnt to promote normally (and probably really!) dull, mundane products as essential tools to help people to self-actualise or become better people by fulfilling aspects of the hierarchy of needs. Shaving products, for example, will use masculine features, a deep woman, and images of a happy couple to suggest that buying this razor will make you more of a man, and many products use similar tactics to advertise themselves as life enhancing. The need fulfilled here is of course the ego, and a man's wanting to be liked by a person usually of the opposite sex.