How to create a story to remember things using the retentive method. 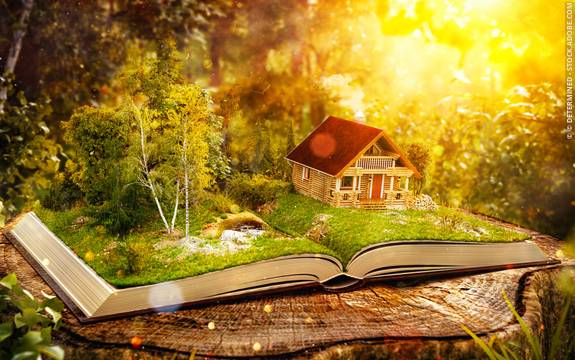 Read through the following, allowing yourself to form mental pictures as you go along. When you come to the end, turn away from the computer and write down the list of words in the correct order. You'll be surprised at how well you do.

I'm going to form a short story around the words that you're going to remember, and as you form the images in your mind, exaggerate them or make them appear comical.

The first word I want you to think of is television and its a very large, pink plastic television, so imagine a large, pink plastic television. And the next word is book. and you see that the reason the pink, plastic television is so big is because it is standing on a pile of old history books, so, the television is standing on a pile of old books and the third word is tree. And suddenly the book decides it wants to be a tree and it grows so big that branches stick out of the television and reach up. The fourth word is chair and looking up to the top of the tree you see a rocking chair nestled between two branches. So the fourth word is chair, and it's up there between those branches. The next word is jelly and the chair is made of jelly and is wobbling around in the tree. The sixth word is cat - and suddenly a fat black cat with three legs runs up the tree and becomes so tired that he goes to sit on the jelly, but he is so fat and the jelly so wobbly that the cat comes tumbling down out of the tree. The seventh word is nurse and the nurse comes running up the cat to see if he's alright. When she sees that the cat only has three legs she begins to cry and she sheds so many tears that she needs a tablecloth to dry her eyes and blow her nose on. So the eight word is tablecloth. Suddenly a gust of wind blows the tablecloth out of her hand and up in the air. So imagine now a tablecloth flying through the air - and the ninth word is airplane and a jumbo jet comes soaring through the sky and gets all tangled up in the tablecloth. The tenth word is chocolate and you suddenly notice that the airplane is not a real one, but a chocolate one and looks delicious. The eleventh word is spider - and a money spider comes up to the chocolate and licks it - really enjoying the taste. And the ninth and final word is candle, and the chocolate that is left has a blue candle sticking out of it with purple and green smoke that wafts into the air.