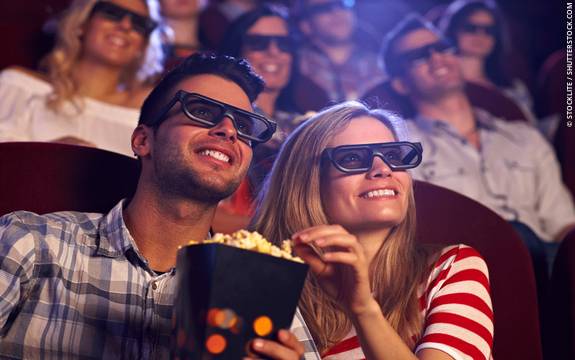 Ever watch films or read novels and feel as though you are being ‘swept away’ to another world? Have you ever felt so attached to a character in a story that you shared their heartbreak when he met with misfortune, and her joy when she triumphed?

If you have, you are not alone: you are likely experiencing narrative transportation, a phenomenon whereby audience members feel so involved in a storyline that it can influence their attitudes and behavior in reality, even after they have finish watching a film or reading a story.

Narrative transportation occurs when a plot engages you to the extent that you can envisage a scene in your mind, or imagine the way a lifelike character might feel and behave, even outside of the story.

You may feel empathetic towards a character - as though you can ‘place yourself in his or her shoes’ - and root for the underdog of a story, such the biblical tale of David and Goliath, as we yearn for a disadvantaged but determined David to defeat the unruly giant, Goliath.

Whilst the effect of fictional narratives on audiences’ attitudes has long been recognized, the concept of narrative transportation as a implicit form of influence was first identified by Melanie Green and Timothy Brock at Ohio State University in 2000.

Green and Brock produced a scale which could be used to measure subjects’ susceptibility to narrative transportation and conducted an experiment in which participants were asked to read a murder story and then complete a questionnaire regarding their own beliefs. The researchers found that, following reading the story, the opinions of participants who experienced higher levels of transportation were more likely to be affected by the contents of the story than those who were less transported (Green and Brock, 2000).

Narrative transportation enables us to immerse ourselves in fictional worlds and offers a form of escapism from the monotony of everyday life. A correlation has been found between the extent to which a film viewer experiences narrative transportation whilst watching a movie, and their reported enjoyment of the plot (Hall and Bracken, 2011).

Furthermore, the worthy protagonists of fictional stories and movies can inspire audiences and even serve as role models, providing us with qualities to aspire towards.

The influence of narrative transportation has a darker side, too, with reports of murders and other ‘copycat’ crimes being inspired by the actions of criminals that have been reported in news items, as well as the behavior of characters in TV crime shows and films.

But, do crime stories inspire real-life crimes, or is their oft-reported influence simply a stock excuse for defendants on trial? However difficult it is to prove that such storylines caused an individual to act in a particular way, it is clear from the findings of numerous studies that narrative transportation can affect the attitudes of viewers to varying degrees.

One such study reported that people assimilate their attitudes and behavior with that of a character in a story after reading it. Appel (2011) asked participants to read a narrative describing a football hooligan, while a control group was given an unrelated text.

Appel then tested the knowledge of the two groups by administering a test and found that those who had read about a football hooligan assimilated their intelligence level to that of the text’s protagonist, and performed worse on the test than the people who had not read about the hooligan (Appel, 2011).

The study’s findings suggest that we seek to emulate the personality traits we admire, assimilating their attitudes, whether they belong to a real-life role model or a fictional character.

Narrative transportation can also serve to promote or reinforce typical traits associated with particular societal roles. In an web-based experiment, psychologist Tobias Richter asked participants to read one of two passages of text: one detailing a woman’s experience of motherhood or another with a contrasting account of everyday life. Richter found that those who read the motherhood passage later self-identified with personality traits commonly held to be ‘feminine’ than the control group (Richter et al, 2013).

Where a narrative describes a set of characters belonging to a distinctive group, group identification can occur, leading the reader to feel as though they are a part of that group, even if they would not normally be associated with it.

For instance, a U.S. study found that the readers of novels containing wizards and vampires projected the characters’ often surreal qualities onto themselves, assimilating with the social groups presented in the respective fictional worlds.

Gabriel and Young (2011) asked participants at SUNY Buffalo in New York to read passages from either a well-known British wizard novel or a vampire novel by a U.S. author. After reading the passages, the participants reported that their social attitudes and physical characteristics more closely matched those of either the wizards (e.g. feeling more ‘British’) or the vampires, with whom they had identified in the text.

Of course, everyone’s experience of a story is different and the extent to which narrative transportation affects someone’s opinions will vary from one person to another.

Mazzocco et al (2010) found that a narrative which contained characters with a tolerant attitude towards homosexuality only affected participants who had been previously identified as being susceptible to narrative transportation, whereas people who do not experience stories in this way were not as prone to being influenced.

Your own view of a story can be affected by your previous, real-life experiences of events alluded to in a plot, and by your attitudes to the themes of novel. For instance, a viewer’s empathy with a character in a soap opera who is seeking revenge after being cheated, may be influenced by whether or not they themselves have been cheated on.

Similarly, a moralistic person may derive more pleasure from seeing a character achieving justice and being dealt with fairly in a story in a way that reinforces their existing attitudes.

Research conducted in 2015 showed that an individual’s personality traits can also affect the extent to which they are ‘transported’ by narratives. Meade (2015) measured people’s ‘Big Five’ personality traits - openness to experience, conscientiousness, extroversion, agreeableness and neuroticism - and found a link between their scores on each trait and the transportation experienced as a result of narratives.

Given that storytelling may be considered an implicit form of influence, as an audience usually remains unaware that an argument has ever been made when a narrative is used, narrative transportation can often be found in television commercials and other forms of marketing, where an affluent or desirable lifestyle is associated with ownership of a particular brand of car, or the health benefits of a product are promoted by a member of a close, joyful family. Viewers are drawn into a fictitious world in which they are living this aspirational lifestyle, which adverts subtly infer can be achieved by purchasing their product or service.

But why does this form of influence seem to be so effective?

A possible explanation was proposed by marketing professor, Jennifer Escalas, who suggested that viewers adopt a less critical attitude when engaged in a compelling story than they would be if a person simply presented an argument to them (Escalas, 2013). For instance, if a salesman lists the lifestyle benefits of owning an expensive new car to a potential buyer, they will likely evaluate the benefits and drawbacks of purchasing the vehicle and decline to buy it.

However, if the same person watches an advertisement for the same car during an ad-break, in which the car is driven to a beach with a smiling couple sat in it, they will be transported to a fictitious scenario in which the benefits of owning the car, however unrealistic, are promoted without them even realising.

Escalas’ findings support the entertainment overcoming resistance model, or EORM, which suggests that persuasive arguments, such as sales pitches, presented in the form of a narrative, are more likely to persuade a person than when the argument is presented in isolation.

Social Influence
Why do people to conform in groups? A look at how social influence affects opinions and behavior.
Minority Influence
Minority influence enables individuals to change the opinions of others. We look at how it changes opinions and the factors that affect minority influence.
Behavioral Approach
The behavioral approach explained: Introduction to the branches of behaviorism in psychology, assumptions of the approach and an evaluation.