Free Will vs Determinism

Exploration of the free will vs determinism debate, including a look at compatibilism. 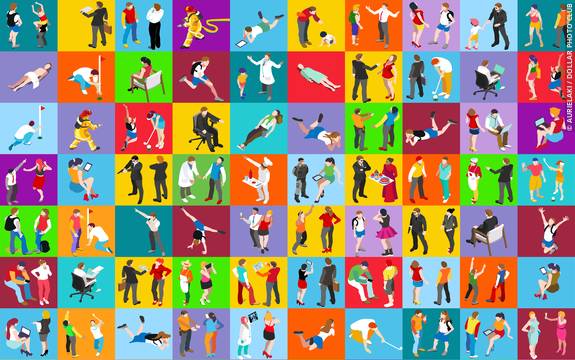 Are we able to make our own decisions freely, or are our actions predetermined by our genetics, our environment and how we have been conditioned to behave?

This question of free will versus determinism is the subject of ongoing debate by psychologists, scientists, theologians and philosophers.

On the one hand, our consciousness gives us the space to contemplate decisions and leads us to believe that we have the free will to make choices. The belief in free will is an ancient one and is fundamental to the concept of biblical original sin - the philosophical idea that humans are able to choose their behavior, including sinning.

However, centuries of scientific developments have taught us that every event can be explained in terms of cause and effect. As thoughts can be reduced to a series of chemical reactions in the brain, they can in theory be understood and predicted in the same way that a chemistry experiment would seek to understand the behavior of chemicals.

The issue of "free will vs determinism" remains significant today as it questions the extent to which we value the unique quality of life and people's ability to exercise free will in decision-making. Moreover, what are the moral implications if free will exists merely as an illusion in our minds and our destinies are predetermined?

In this article we will evaluate the evidence for both free will and determinism and will look at how different branches of psychology approach the debate. We will also look at a compromise which aims to offer an alternative explanation in this polemic argument.

First-hand experience of free will

Our everyday experiences give the impression that we do in fact possess free will. Using your senses, you are consciously aware of your surroundings and are able to make decisions based on what you have observed. This argument for free will appears self-evident based on your perception of yourself and your place in the world. However, to what extent can you rely on your senses and awareness to truly reflect reality?

Let us consider a dream. At the time, the experience may be vivid and might immerse us in the illusion of reality, but when we awake, we realise that we were being deceived into believing that what we experienced was real. This dream argument leads us to question whether our consciousness is giving us the correct impression of reality, and whether we can take our experiential evidence of free will as proof of its existence.

Nonetheless, free will is taken as a truth in modern society. By making the right decisions, we can further ourselves. A wrong decision leads to consequences, most literally in the case of the judicial system, where crimes (except in the case of insanity) are considered an exercise of free will - a person was able to choose either to commit or not to commit the crime.

In spite of factors around us influencing our behavior, as determinism notes, we can still enjoy free will and be aware that environmental factors are influencing, if not dictating, our behavior. For example, in a city, you may pass by countless advertisements. You will be aware that advertisers are trying to influence your buying habits, but will know that you have the free will to either succumb to or to resist these messages.

The humanistic approach in psychology, with its emphasis on the patient, supports the idea of free will over the reductionist determinism.

In support of this, the U.S. psychologist Carl Rogers developed person-centered therapy - a therapeutic approach which embraces an individual's self-control and ability to choose their own path of recovery using free will.One of the tenets of person-centered therapy is the maintenance of unconditional positive regard for patients without reducing their problems to genetic factors or conditioned behavior, as determinism might.

Additionally, Abraham Maslow, a proponent of humanistic psychology, developed the Hierarchy of Needs, which humans strive to satisfy in an attempt to self-actualize, or reach their full potential.1

Whilst these needs are innate influences on our behavior, they are means to achieving happiness, rather than a solely biological motivation for our actions.1

Support for free will among psychologists is, however, limited. As our scientific understanding increases, so the case for determinism against free will strengthens. We observe cause-and-effect in other branches of science - in cellular behavior in biology, chemical reactions in chemistry and similarly in physics, Newton's Laws of Motion state that "every action must have an equal and opposite reaction".

If such empirical branches of study rely on cause-and-effect, which should psychology, which uses similar methodology in experiments and studies, take exception to cause-and-effect? Does free will not contradict our logical, scientific understanding of our world?

Apart from humanistic psychology, most approaches take a deterministic view of behavior. Behavioral psychologists observe stimuli and how it affects our behavior and biological psychology explains our behavior by our genetics and biochemical makeup. Cognitive psychology understands our behavior to be a result of various neurological processes, including thoughts, accepting the nuances of our individual differences rather than the influence of personality and free will on our behavior. In the case of the psychodynamic approach, Sigmund Freud sought to understand our behavior as having been caused by events and relationships earlier in life, rather than our free will at any current moment. Only humanistic approaches stress the control that an individual can exert using their own free will.

Whatsmore, research that reduces behavior has lead to many key studies whose findings have lead to numerous practical applications, not least in the development of medicines.

B.F. Skinner (1904-1990) developed the 'Skinner Box' which showed us how behavior can be influenced through operant conditioning - using positive and negative reinforcements to reward or punish behavior in an effort to affect future behavior.2

Additionally, Pavlov's dogs demonstrated how classical conditioning could be used to induce salivation - behavior that we do not even have full conscious control over.3

What affects your ability to make free choices?

When we take reductionism to its full conclusion, we reach chaos theory. This supposes that if were able to observe the position and behavior of all of the irreducible constituent parts of the universe, such as subatomic particles, logic would dictate that we could then accurately predict their behavior in the future and so predict the future. One example of chaos theory is the butterfly effect - the idea that the fluttering of a butterfly's wings can create a minute air disturbance which can contribute to more significant effects, such as a wind and then a hurricane. Whilst full observation of the universe is unimaginable, chaos theory gives a good example of reductionism and how the constituent parts of something can influence the behavior of the whole, such as the effect of individual neurons on brain activity on a larger scale.

Is free will predetermined?

Yet, if we are so consciously sure of our ability to exercise free will, how can determinism override this idea? In some ways, determinism is problematic for us to consciously understand, and presents us with another problem: even if we make choices consciously using free will, what is to say that our free will itself is not predetermined?

A study by Custers and Aarts (2005) noted how many of our actions, which we consider to be of our own volition, are in fact initiated on a subconscious level without us even consciously realising.4 Kühn and Brass (2009) reinforced this with an experiment comparing the timing of people's reactions to their conscious awareness of them, which again found that we sometimes act before we make a decision consciously.5 As free will is a product of our consciousness, this casts further doubt on the idea that we exercise it in its purest sense.

Like free will, the deterministic viewpoint is not without its critics. Determinism, for example, reduces human behavior to the factors that cause it, rather than taking into account the spontaneity and individuality of people when they make decisions. The linguist Noam Chomsky has been also highly critical of B.F. Skinner's view that operant conditioning can determine our behavior in relation to language acquisition. Chomsky noted that determinism does not take into account the way in which we innovate when using language in a way that has not been simply taught through conditioning.6

"Man can indeed do what he wills, but he cannot will what he wills."
Arthur Schopenhauer, German philosopher7

If empiricists have shown how cause-and-effect supports the case for determinism, yet we hold some degree of control over our actions, can a compromise be found between these two contradictory schools of thought?

One theory which allows free will and determinism to coexists is compatibilism, which insists that the two ideas are compatible simultaneously. Compatibilism claims that a person has moral responsibility over their own actions where they show the intent to carry them out (rather than being influenced by another person), even if this intent is determined.

Whilst compatibilism offers a convenient compromise between the two ideas, it has been rejected by incompatibilists such as the U.S. philosopher William James (1842-1910) as "soft determinism". Incompatibilists reject the idea that free will and determinism can coexist.

The debate between determinism and free will continues without universal agreement. There are elements of truth to each argument, and while our everyday experiences seem to contradict the idea that our behavior is determined, empirical methods insist on some degree of causation. Soft determinism seems to offer an acceptable accommodation of the truths in both arguments.